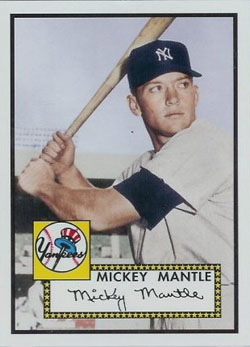 You may or may not be a big sports fan or someone who follows baseball. But chances are very good that you have heard the name Mickey Mantle, even if you have no idea what made him famous. In May we celebrate one of the things that put Mickey Mantle on his way to becoming a household name -- his first home run on May 1, 1951. He also attempted to hit a home run completely out of Yankee stadium on May 22, 1963. He did not succeed, but came close, and this sealed his place in history as one of the greatest power hitters of all time.

Is being a good baseball player enough to make someone a household name? By looking at Mickey Mantle's life, it is easier to see why nearly every American over the age of 20 has heard of Mickey Mantle.

The first thing to know about Mickey Mantle is that he was not a "good" baseball player, or even a "great" baseball player. He was, possibly, the greatest baseball player of all time. He played for the New York Yankees and his list of accomplishments is just unbelievable. People paid attention to that. For example, Mickey Mantle played in the World Series in 1951, 1952, 1953, 1955, 1956, 1957, 1958, 1960, 1961, 1962, 1963 and 1964 [Source: Official Mickey Mantle site]. In 7 out of those 12 appearances, the Yankees won. That gave him an incredible amount of media exposure, especially at a time when baseball was more important culturally than it is today. Other Mantle highlights include:

And then there was the power hitting -- something at which Mantle excelled. He could hit balls completely out of the stadium, and frequently did. Several of his runs are estimated to have traveled over 600 feet. On three occasions he came within inches of hitting a ball out of Yankee stadium -- a feat that has never been actually accomplished. Mantle's third attempt in May 1963 was a huge hit that would have traveled more than 600 feet, but the ball hit the façade of the stadium just inches below the freedom of the open sky.

Accomplishments like these gave Mickey Mantle incredible media coverage -- for example, he was on the cover of time Magazine in 1953 and became a household name.

Mickey Mantle retired in 1969, and at that point began the second part of his life. In other words, he became a public personality and was often discussed in gossip columns. For example, Mantle started a chain of restaurants shortly after retiring, but they failed. Then he opened a sports bar in New York and it did very well. Mantle went to work for a casino, and for this he was banned from baseball. Several years later he was reinstated, along with Willie Mays who had been banned for the same offense. Most significantly, Mantle had a terrible problem with alcoholism -- a problem that eventually put him into rehab, and which he later spoke about publicly. Alcohol would eventually kill Mantle by destroying his liver, and he died in 1995.

In other words, the reason you have heard of Mickey Mantle is because he was one of the greatest players in all of baseball history, and then after retiring he kept himself in the news simply by living his life. For all of his accomplishments, he will be remembered for many decades to come.

For more information about Mickey Mantle and related topics, check out these links: