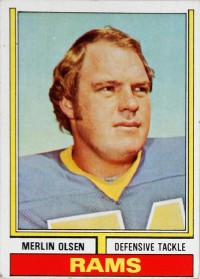 Merlin Olsen was selected to a record 14 Pro Bowls during his 15 NFL seasons. See more pictures of football players.

Merlin Olsen was everything a coach could want in a defensive tackle. He was big, strong, agile and a natural leader. His physical tools earned him the Outland Trophy and All-American honors as a collegian at Utah State. As a pro with the Los Angeles Rams (1962-1970), the 6'5", 270-pound lineman was named to the Pro Bowl an unprecedented 14 times.

A Phi Beta Kappa at Utah State, Olsen (born 1940) placed a high value on education. During the off-season while playing for the Rams, he earned a master's degree in economics.

A clean player, he never subscribed to the philosophy that you had to "hate" your opponent to reach the necessary emotional level to defeat him.

"If you are motivated by pride and the desire to win," he stated, "you will want to dominate your opponent, but that is a lot better than hatred on which to tie your success."

For 10 years, Olsen's partner on the left side of the line was the flamboyant Deacon Jones. Together, the two future Hall of Famers were unstoppable. They were joined by Lamar Lundy, Rosey Grier, and later Roger Brown to form a unit known as the "Fearsome Foursome."

In the 1960s, with Olsen as their leader, the Fearsome Foursome were the terror of the NFL. "We never had a bad game from Merlin," Rams coach George Allen once remarked. "We always got a good game and, more often than not, a great game."

Throughout his career, Olsen skillfully merged his physical tools with his authoritative style. By the late 1960s, retirements and trades began to break up the Fearsome Foursome.

New additions to the line looked to Olsen to be the "glue" that would hold them together. It was a job he accepted willingly and performed effectively. "Jones was the inspirational force of the Foursome," suggested Rams defensive line coach Sid Hall, "but Oley provided the leadership."