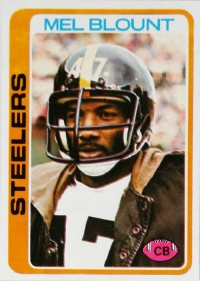 Mel Blount was the prototype cornerback of his era and a major reason why the Pittsburgh Steelers were the dominant team of the NFL in the 1970s. He had ideal size, speed, and quickness, plus the toughness and mental ability to adjust his coverage tactics to rule changes that favored receivers.

The 6'3", 205-pound Georgia native played his college ball at Southern Univer­sity. In 1970, Pittsburgh made Blount (born 1948) a third-round draft choice. Although he excelled on the kickoff return team as a rookie, with a 29.7-yard average, it took him a while to become a top cornerback.

By 1972, he was ready: He didn't allow a single TD pass all season. In 1975, the year the Steelers won their second Super Bowl, Blount was named the NFL's most valuable defender by the Associated Press. That season, he led the NFL (and set the Steeler record) with 11 pass interceptions.

The Steelers' defense of the 1970s boasted such stars as Joe Greene, Jack Ham, L. C. Greenwood, and Jack Lambert. Blount more than held his own in that glittering company.

He was known for his rugged play, making hard but clean tackles all over the field. His specialty was the "bump-and-run" pass defense. He'd stick to a pass receiver, shoving and bumping him down the field. Because of his size and speed, Mel literally overpowered pass catchers.

Midway through Mel's career, NFL rulemakers made such harassment of receivers illegal five yards past the line of scrimmage. They could have called it "The Blount Rule." But even after the rule took away his favorite technique, Blount remained one of the league’s best cover men. In 1978 and '79, he helped the Steelers to two more Super Bowl victories.

Blount, who played an even 200 games for the Steelers, finished his 14-season career with a Pittsburgh-record 57 interceptions. He was named All-NFL three times and to the All-AFC team on numerous occasions. He played in five Pro Bowls and, in 1989, was elected to the Pro Football Hall of Fame.