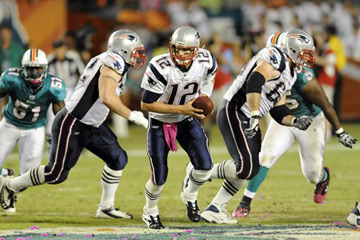 New England Patriots quarterback Tom Brady (12) during a game against the Miami Dolphins on Oct. 4, 2010, in Miami.
AP Photo/Steve Mitchell

Meeting your favorite football team or player can be as challenging as getting tickets to a major game during the season -- it's possible, but you have to work at it, and sometimes luck plays a role, too. Players are celebrities and are often buffered from the public at large by public relations minions, security and the simple fact they rarely move in the same circles -- financial or social -- as their fans.

But there are opportunities. The best way to meet the players in a team environment is to monitor the franchise Web site or get on a general mailing list -- one that will notify you of upcoming public events.

Stacey James, Vice President of Media Relations for the New England Patriots, said their franchise holds general team events twice a year. One is a golf tournament and the other is a season kick-off gala. "These are events where the fans can purchase tickets to attend," James said. And for people willing to travel, the team's pre-season training camp (in July) is also open to the public. "[Fans] can watch the practice and the players will sign autographs," he said.

While these events open the team to the public, they're often contractual obligations for the player. James said there were other opportunities to meet smaller groups of players, or even an individual player, throughout the rest of the year.

Most NFL teams entertain requests from the public for appearances. James said these requests are weighed and considered and then presented to players who may be interested in attending, or believe the event has a worthwhile purpose. "We don't dictate what events a player will attend," James said. "It's up to each one." He added that with the number of requests coming through each year it was best to be creative to attract a player's attention and have them think about the possibility of attending.

The other side of this coin is player requests. Many players have preferences for attendance; maybe they're trying to help raise money for juvenile diabetes, for youth football programs or for shelter animals. If these requests come through and are brought to the attention of a player, he may be more inclined to attend than he normally would.

It's these player preferences that highlight one of the tougher sides of meeting a team or a player, said James. "These are people, they have families and lives off the field," he said.

One example of this life off the field was one player (not named), who spent every Thursday night he could at a local Boys & Girls Club playing chess with the kids. "This was going on for a long time, years I think, before we found out about it," James said. "And we only found out about it from a reporter who called us and asked if this was something we did. But it wasn't. It was something the player did on his own because he wanted to."

Contact with players in a more informal setting is another way to meet them. This can be accomplished through serendipity -- like meeting a player when you go pick up your child at the local Boys & Girls Club. For the more ambitious fan it's possible to follow a player's activities through the newspaper accounts, fan club contacts, Facebook or other social networks. Some even wait for a tweet on Twitter. "Fans often find players in public places they're likely to frequent," James said, adding the Information Age has been good to find celebrities of any stripe.

However, he cautioned the more ardent hounds -- simply because a player is in a public place doesn't mean he wants to be treated as a public figure. "They could be out with their family or friends," he said. "It's up to them as to how they handle it." Some will always sign autographs or talk while others won't.

The final caveat from fan clubs is to treat the players with respect and they'll likely show the same. After all, they're just people like you -- only bigger and faster.

For more information about football and other related topics, follow the links on the next page.

The Best, the Worst and the Weirdest College Mascots (and Why We Love Them)
10 Tips for Hosting a Fantasy Football Draft
Eric Dickerson