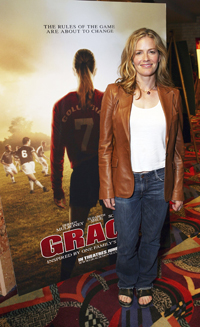 Elisabeth Shue was honored with an Academy Award® nomination for her performance in Mike Figgis' "Leaving Las Vegas," in which she starred opposite Nicolas Cage. Shue's poignant portrayal of a prostitute who has a doomed love affair with an alcoholic also brought her Best Actress Awards from the Los Angeles Film Critics, the Chicago Film Critics and the National Society of Film Critics. She also received nominations for a Golden Globe Award, a Screen Actors Guild Award and an Independent Spirit Award.

Shue most recently starred in "Dreamer" opposite Kurt Russell and Dakota Fanning. Her list of film credits includes:

On television, Shue starred in the Oprah Winfrey Presentation "Amy and Isabelle." In addition to her work on the screen, Shue starred on Broadway in Richard Nelson's "Some Americans Abroad" and off-Broadway in Lanford Wilson's "Burn This," opposite Peter Sarsgaard.