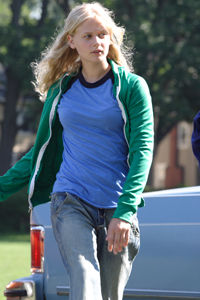 Schroeder was most recently seen in Richard Loncraine's "Firewall" for Warner Brothers Studios playing the daughter of Harrison Ford's and Virginia Madsen's characters; she is taken hostage in order for the kidnappers to blackmail Ford.

Previously, Schroeder portrayed Serena Baldwin, the adorable daughter of Scotty Baldwin and Lucy Coe, on not one but two soap operas: "General Hospital" and its sister show "Port Charles." She has completed over 480 episodes in six years as Serena Baldwin.

Schroeder added comedy to her resume by recurring on Disney Channel's top show "Lizzie McGuire." She reprised her role as Melina Bianco, a devilish, free-spirited, prankster and best friend to Matt McGuire in "The Lizzie McGuire Movie." She also stepped into the ring with The Rock for "The Best D*** Sports Show Period." Schroeder has guest starred on "The George Lopez Show" for ABC, as well as on "Dawson's Creek" for the WB Network. She has provided her voice in two movies,"Babe: Pig in the City" and "Toy Story II," and played Cindy Brady in the movie "Growing Up Brady." Schroeder has appeared in dozens of commercials, her favorite being "Got Milk?"

Schroeder lives in Los Angeles with her parents and younger brother. In her free time, she enjoys horseback riding, fencing, karate, SCUBA diving, surfing and soccer.