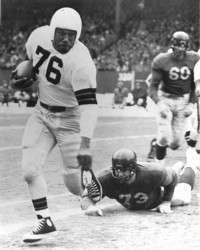 Marion Motley was one of the four players who challenged pro football's race barrier in 1946, just one year before Jackie Robinson signed with baseball's Brooklyn Dodgers.

Injury ended Washington's career after two seasons, while Strode played just the 1946 season. Motley and Willis, however, went on to have Hall of Fame careers.

Motley (born 1920) joined the Browns as a 26-year-old rookie. Coach Paul Brown was already familiar with Motley, having coached the big fullback at the Great Lakes Naval Training Station during World War II.

Marion realized that not everyone in the all-white pro ranks would accept a black player. "Paul addressed that at the first meeting," Motley explained. "He said, 'If you can't get along with your teammates, you won't be here.'"

While Motley insists Browns players were supportive, it wasn't always that way around the league. He learned, however, to channel his anger into his play.

At 6'1" and 240 pounds, Marion was an imposing figure. While he was quick and agile, he preferred to attack defenders straight on. When quarterback Otto Graham had trouble finding an open receiver, he sought out Motley.

Together, they established the fullback as an effective receiver. The draw play, now a staple in every NFL team's offensive arsenal, began with Motley and Graham.

Motley, the AAFC's all-time leading rusher, led the NFL in rushing in 1950. That year, in a game against Pittsburgh, he gained 188 yards on just 11 carries for a 17.1 yards-per-carry average.