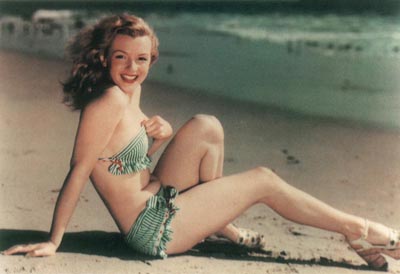 Always on the lookout for fresh, new faces, Hollywood executives regularly perused pinup magazines. By 1946, Norma Jeane had attracted the attention of no less a movie mogul than Howard Hughes.

Norma Jeane's work for Earl Moran and other photographers and her appearances in pinup magazines had a direct relationship to her later success as a movie star. Her entrance into movies was not just a lucky break, as some biographers have implied, and her modeling experience was more than just a way for her to mark time.

In truth, Norma Jeane's early modeling experiences are integral parts of a long line of carefully planned events that led to her first film contract. That movie stardom was the goal of Norma Jeane and Blue Book's Emmeline Snively is evident from certain strategies and tactics employed from almost the beginning of their professional relationship.

In 1945, for example, Norma Jeane made her first appearance before a movie camera at the Blue Book Model Agency. Actually no more than an amateur screen test, the footage shows a smiling, curly-haired young model with the name "Norma Jean Dougherty" in block letters beneath her. It seems unlikely that Blue Book would have bothered with such a test if the movies had not been Norma Jeane's ultimate goal.

Sylvia Bamhart, Norma Jeane's hairdresser, confirms this assumption in her unpublished memoirs about her friendship with the young model. She not only mentions that Norma Jeane discussed her ambitions with her but also notes that she was willing to endure changes in her physical appearance in order to achieve her goal.

Snively also directed Norma Jeane toward pinup modeling when she realized that the young girl's figure and natural charisma were not suited to fashion photography. Certainly, Snively knew that Norma Jeane's cover photographs on pinup magazines could attract the attention of certain movie producers.

When Norma Jeane returned from Nevada after filing her divorce papers in the summer of 1946, she discovered that Snively's plans for her had grown in proportion. Eager to attract the attention of Hollywood, Snively had planted an item in the gossip columns about Norma Jeane.

At the time, Howard Hughes -- millionaire industrialist, aviator, and president of RKO Pictures -- was recuperating in the hospital from a serious flying accident. On July 19, 1946, the following item appeared in the gossip column of the Los Angeles Times: "Howard Hughes is on the mend. Picking up a magazine, he was attracted by the cover girl and promptly instructed an aide to sign her for pictures. She is Norma Jeane Dougherty, a model."

Over the past months, Norma Jeane had appeared on the cover of Laff magazine four times, using her real name as well as her alias, "Jean Norman." Hughes -- notorious for his interest in pretty women -- supposedly glanced at pinup magazines for the purposes of discovering starlets; it is possible that he saw her on these covers.

A Hughes aide did make an inquiry about Norma Jeane, but whether Hughes himself had noticed her magazine covers remains unknown. Over the years, this story has been endlessly recounted and reinterpreted until the facts have become overshadowed by publicity and myth.

In some versions of the story, Emmeline Snively sent the publicity notice to powerful Hollywood columnists Louella Parsons and Hedda Hopper because they owed her a favor. Snively's version of the notice read, "Howard Hughes must be on the road to recovery. He turned over in his iron lung and wanted to know more about Jean Norman, this month's cover girl on Laff magazine."

In simpler recountings of the tale, Hughes supposedly noticed Norma Jeane because she appeared on four or five magazine covers in a single month, prompting him to track her down.

The particulars of the story aside, Hughes's nominal interest in Norma Jeane was parlayed by her new agent into grabbing the attention of other film studios, most notably Twentieth Century-Fox. Realizing the need for professional help if Norma Jeane were to snag a movie contract, Snively had enlisted the aid of agent Helen Ainsworth of the National Concert Artists Corporation.

After fielding some of the calls herself, Ainsworth handed Norma Jeane over to one of the agency's talent representatives, Harry Lipton. Almost immediately, Lipton set up a meeting with Ben Lyon, the casting director at Fox.

Norma Jeane must have known that the odds were stacked against her and that a break that might lead to movie stardom was unlikely. But this only strengthened her resolve to reach her goal.

Marilyn recalled later, "I used to think as I looked out on the Hollywood night, 'There must be thousands of girls sitting alone like me, dreaming of becoming a movie star. But I'm not going to worry about them. I'm dreaming the hardest.' "

See the next page for the story behind Norma Jeane changing her name to Marilyn Monroe.