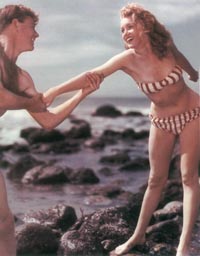 A bikini swimsuit of the type Norma Jeane wears here was quite rare on the nation's beaches at the time.

Norma Jeane's hair may have been progressing nicely during the mid-'40s, but her personal life was another matter. There is little doubt that her marriage to Jim Dougherty was based on a shaky emotional commitment from Norma Jeane. Still, the effect of her new profession on her marriage would not be readily apparent for a few months.

In the summer of 1945, Norma Jeane was still living with her in-laws, but their disapproval at her vocation made a move back to Ana Lower's more comfortable for all concerned. Jim's mother had suggested that Norma Jeane write to Jim, who was still overseas, to ask his opinion before she embarked on her modeling career. Norma Jeane had insisted there was not time.

By the time Jim came home around Christmas on his second leave, Norma Jeane had quit her job at the Radio Plane Company and was pursuing modeling full time.

Though Norma Jeane seemed happy to see her husband, a number of changes were readily apparent to Jim -- changes that both surprised and disappointed him. He noticed a stack of unpaid bills from local department stores lying on the table, which led to his discovery that Norma Jeane had spent most of his allotment as well as their savings on clothes and accessories. She defended her actions by telling him the clothes were necessary for her career.

Her career became Norma Jeane's primary topic of conversation, as opposed to their future. She also spent a great deal of time on modeling assignments while Jim was home on leave, including an extended excursion to the Pacific Northwest with photographer Andrè de Dienes. Dougherty's disappointment was fueled by the realization that he was no longer the center of her attention. Now he was only incidental to her life.

In his 1976 book The Secret Happiness of Marilyn Monroe, as well as in various interviews and articles, Jim Dougherty blames the breakup of his marriage on his Merchant Marine duties. He paints an idyllic portrait of his life with Norma Jeane in the period before he was shipped overseas.

Dougherty implies that if he had not left Norma Jeane alone, circumstances would have been different for them. He talks of Norma Jeane Dougherty and Marilyn Monroe as though they were two different people -- as if in his absence persons and forces beyond his control changed his naive, uncomplicated Norma Jeane into an ambitious, calculating career woman.

It's difficult to doubt the sincerity of Dougherty's comments. But in the end, his argument is unconvincing. Norma Jeane pursued her career with a determination that belies Dougherty's insistence that she enjoyed "peace and tranquility, security, [and] the uncomplicated joy of just being alive" while married to him. It seems unlikely that Dougherty's presence would have been sufficient to deter Norma Jeane's ambitions.

When Jim shipped out again, he knew that Norma Jeane was slipping away from him. She sent him no letters once he was back out to sea, whereas before, she had written almost every day.

After several weeks, he heard from her Las Vegas attorney. Norma Jeane had established residency in Nevada and filed for divorce. Jim refused to sign the papers until he came home on leave once more, and they could have a long talk. The discussion had little effect on Norma Jeane's decision. She was determined to become an actress, and, according to Dougherty, had been told her chances of a contract with a major film studio were next to impossible if she were married.

Finally, in the early autumn of 1946, Dougherty reluctantly signed the divorce papers; Norma Jeane was gone from his life. Meanwhile, her career as a pinup was on the rise. Learn more about this part of her journey to stardom in the next section.