Browse the article How did they make the Toyota Tundra 'Killer Heat' commercial? 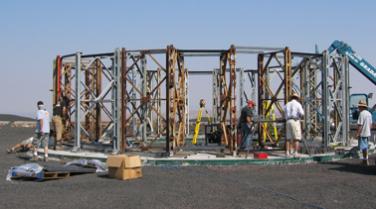 Construction of the "corkscrew" road begins in the desert, where temperatures neared 115 degrees Fahrenheit.
Courtesy Toyota

­­A­sk any­one what the Super Bowl is, and they'll tell you it's ­the final game of the National Football League (NFL) season that decides which team goes home with the Vince Lombardi trophy. There's no disputing this. But a more detailed answer reveals that the Super Bowl has become much more than that. It's a media spectacle, with pregame concerts and activities, days of partying, interactive exhibits and, come game time, a showcase for the biggest and best TV commercials on the air.

In recent years, car manufacturer Toyota has made its mark on the advertising world by shooting some of the most dangerous ads ever attempted. Precision drivers put their lives on the line in real-life demonstrations that test the truck's mettle. The idea is to show the TV viewer something that can't be faked -- no camera tricks­, no computer effects and no post-production gimmicks. The ads have been a hit, but with that kind of success comes the pressure to try and top each one with something bigger and better. 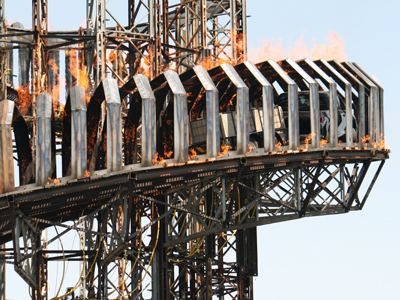 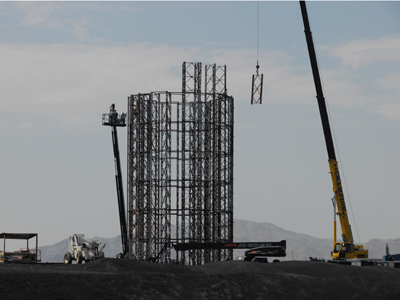 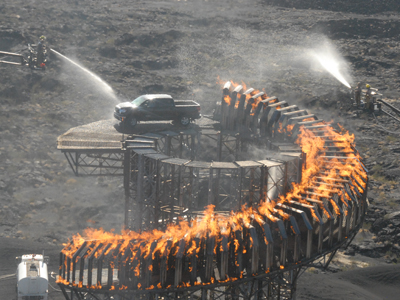 After the haul, the truck takes a welcome, cooling bath.
Courtesy Toyota

­Precision driver Matt McBride had­ his work cut out for him in "Killer Heat." The stunt would be dangerous if he were simply towing a heavy load up a spiral incline -- an incline with an inside grade of 16 degrees and an outside grade of 19 degrees. Unable to see his front wheels and the edge of the steel road, it would only take the slightest slip to send the truck and load of concrete cinder blocks tumbling off the side. Then add a tunnel of fire and temperatures exceeding 285 degrees Fahrenheit (140 degrees Celsius). Even after a dozen test runs, McBride still found the run "scary."

If the truck failed to perform and the transmission overheated, the results could have been truly dangerous. A transmission stall because of overheating in a tunnel of fire 80 feet (24 meters) up isn't a good thing. After testing and numerous practice runs, McBride was able to pull the stunt off without a hitch. The Tundra climbed up and around the tight corkscrew with the transmission intact. When it reached the top platform it got a welcome, cooling bath from fire hoses mounted on cranes flanking the finish line.

Check out the links on the next page to learn more about towing, cooling systems and trucks.