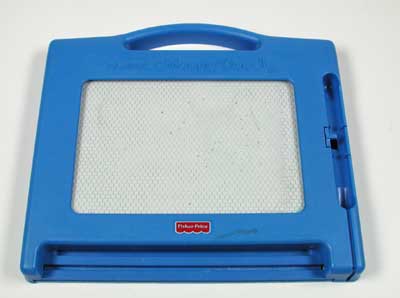 The Magna Doodle... For kids, it's a cool toy. For parents, it's art without the mess. For the rest of us it's a tribute to the beauty of physics. Discover the science behind the Doodle. See more toy pictures.
2008 HowStuffWorks

In 1974, four engineers from Pilot Pen Corporation invented a "dustless chalkboar­d." Their invention has become one of the most popular drawing toys, with more than 40 million sold since its introduction. Countless children have enjoyed playing and learning with it.

This wonderful invention is the Magna Doodletm!

In this article, we will take a look inside this fascinating toy and see how it works.

Inside a Magna Doodle

The Magna Doodle is basically a magnetic drawing board. It has the following pieces:

To work the Magna Doodle, you write something on the surface with the magnetic pen. When you want to erase what you have written, slide the sliding magnet to one side or the other (it works in both directions).

Now, let's look at the pieces in more detail.

The Heart of It All 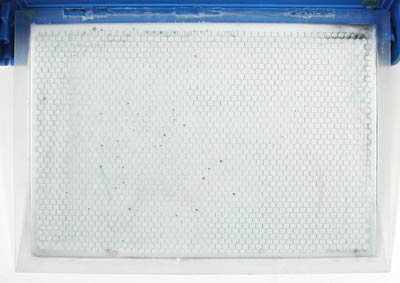 The magnetophoretic display panel is what makes the Magna Doodle unique.

This magnetic display has the following structure:

Close-up of the honeycombed structure of the display

The walls of the middle, honeycombed lattice are less than 0.02 inches (0.5 mm) thick. Each cell of the lattice is filled with a thick liquid suspension or dispersion medium filled with tiny magnetic particles. The liquid dispersion medium is designed so that the particles can be pulled through the liquid in response to magnetic force applied by the pen or eraser, but they will not change their position (float or sink) due to gravity. To do this, the liquid has special properties:

The middle layer is latticed so that there is always an even distribution of the magnetic particles across the entire surface of the display.

Now that we have seen the display, let's look at the pen.

The tip of the magnetic pen

The magnetic pen is ergonomically styled so that anyone, especially little children, can grip it comfortably. The pen is usually tied to the Magna Doodle by an attached string. Some Magna Doodles also come with "shape stampers," which are simply magnets in shapes like diamonds, triangles and circles.

Writing is but one use of the Magna Doodle. You must also be able to erase it, so let's look at the eraser. 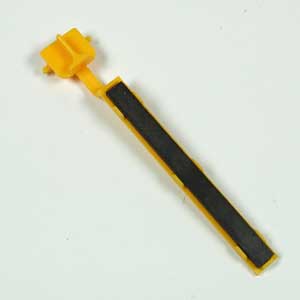 The magnetic eraser consists of a bar magnet in a plastic slider.

The magnetic eraser sits in the back of the Magna Doodle behind the display, and it can't be seen from the front. The eraser fits in a groove on the case that allows it to slide freely from one side to the other.

Now let's look at the final component: the case.

The plastic case holds everything together.

It has two pieces:

A front piece that:

A raised back piece that:

Now that we have seen each part, let's see how the Magna Doodle works! 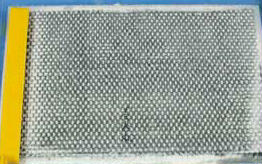 Back view of a clean display

If you look closer at each cell, you will see that the magnetic eraser has aligned the particles to one side!

Close-up view of the cells from the back of the cleaned display: Note that the magnetic particles are aligned to one side (the direction of the sweep).

Now, if you move the magnetic pen along the display, the magnet on the pen pulls the tiny particles away from the back side to the front side, forming a line. Note that the magnet pulls particles from adjacent cells and aligns them in the direction of motion (in this case, to the right).

Because the particles are light and the liquid dispersion medium is thick, gravity will not pull the particles forming the lines back to the other side. What is written will remain undisturbed.

The Magna Doodle is a wonderful toy that allows children (of all ages) to draw and re-draw pictures and words without wasting paper or creating chalk dust. When traveling in a car on a long trip, one can draw for hours without creating lots of trash or having to sharpen pencils. Magna Doodles have been used by teachers to help students practice writing and learn words. Magna Doodles have been used in some unexpected places, too:

There are many creative ways to use this wonderful toy. For lots more information, check out the links on the next page.