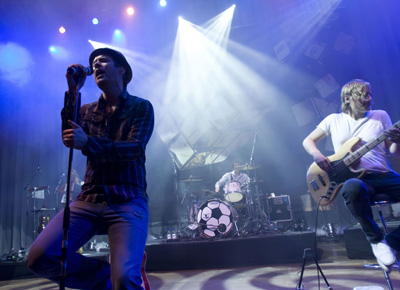 Live sound engineers make sure that the instruments and vocals at concerts blend together.
© Christian Jakubaszek/Getty Images

The guitar player can wail, and the drummer can crash away on the skins. But if the band you're listening to live is sounding really on, there's a good chance an unseen member of the band is having a good night, too.

That person is the sound engineer, and he's responsible for getting ­every subtle tweak of voice and instrument into your ears in a balanced way.

All instruments and voices aren't created equal. For instance, some instruments are louder than others while the acoustic signature of some instruments can get lost. A live sound engineer's job is to wrestle with these factors and coax the correct overall sound out of any situation. The fact is, the band can have a great night but the audience may never know it if the live audio engineer isn't doing their job properly. In many ways, the live sound engineer is as important to a live band performance as any member on stage.

Good live sound engineering and concert sound engineering requires more than plugging in some amplifiers and turning a few volume knobs. It demands knowledge of acoustics and electronics combined with the collaborative skill of an artist to work with a band or producer to give them the sound they want. Every venue is different -- from the cozy bar to a medium-sized concert hall to an outdoor arena -- and each brings its own challenges to audio engineering. But it's the live sound engineer's job to tame acoustics and bring the musicians' efforts home to the audience.

What is Live Sound Engineering? 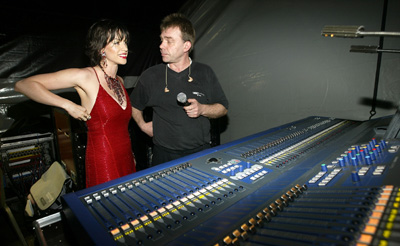 Live sound engineers often consult with performers regarding the mix like Alanis Morissette and her engineer.
© Carlo Allegri/Getty Images

Live sound engineering is like being an audio traffic cop. Typically, a musical group will direct a variety of sounds at the audience, usually through amplifiers. These different sounds must be managed correctly to make sure the audience receives what the group is sending. Managing these sounds is concert sound engineering.

Live concert engineers use electronic amplification equipment, knowledge of acoustics and their well-trained ears to accomplish this feat. They also must be excellent communicators with the ability to translate acoustic ideals into reality for the band while relaying the faithfulness of the band's music to the larger audience. They also often are in charge of a crew of technicians who perform other sound engineering chores, such as setting up microphones and running cables.

Such audio engineering is challenging for many reasons. There are a huge number of variables with which to deal.

First, no venue is alike. Some are large, some are small. Some have hard surfaces that reflect sound crisply while others have carpeting and acoustic ceilings that absorb sound. Audiences may sit at different locations in relation to the band. There may even be challenges with the power available to power sound equipment.

Second, the sound engineer has many masters. He must please the audience, who may have paid for their seats. This can be a challenge because while the sound might be good for one section of seats, another section might present different acoustical challenges.

Also, the live concert engineer must please the musical group, which is paying his salary. Live sound engineers also are responsible for making sure the musicians can hear themselves well, by using a series of speakers called "monitors" that are aimed at the musicians on stage. If a musician can't hear himself well, or he detects something he doesn't like in the overall sound, he may blame the sound engineer.

What kind of equipment do sound engineers use? Turn to the next page to find out. 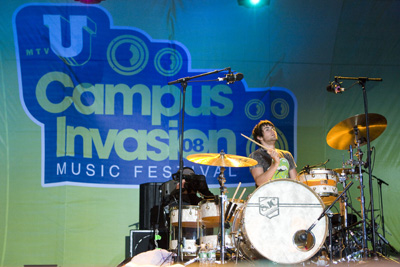 Sound engineering uses equipment such as amplifiers, microphones, audio lines, monitors and mixing boards to control and direct the various sounds emitted by the musical group on stage. Each of these items has specific functions that enable the sound engineer to control the overall audio experience. Together, they capture the sounds made by the musical group and pump them up and send them out to the audience.

Many times, the process starts with a microphone. A microphone uses a diaphragm that moves with air pressures created by sounds, such as a voice. The diaphragm converts this mechanical movement into electrical signals, which are sent down an audio line to an amplifier or other destination, such as an effects box.

Amplifiers are a crucial piece of equipment. Amplifiers take a small sound, such as the nearly silent pluck of an electric guitar string, and enlarge it, making it many times louder. In some cases, musicians plug their instruments directly into an amplifier, such as in the case of an electric guitar. In others, the sound engineer uses a microphone to pick up the sound from a non-electric instrument, such as a set of drums, to feed the sound into the amplifiers. Musicians and sound engineers can also add effects into the sound coming through amplifiers. These might include reverb, which is a kind of echo effect, or "fuzz," a distortion that makes instruments sound rough and edgy.

You've already heard us discuss audio lines. These cables are metal wires wrapped in rubber and can be any length. Their function is to take different electrical signals, from microphones or instruments, for example, and carry them to another piece of equipment.

Monitors and other speakers are the end release point for the amplifiers, or where the sounds come out. Monitors, specifically, are orientated toward the musical group members, and allow them to "hear themselves" as they sound over the amplification system. Monitors are speakers that allow the group members and live sound engineer to monitor the overall audio of the performance.

Mixing boards are large panels of buttons and knobs that control many of the sound qualities coming from the amplifiers. We'll talk more about that in the next section. 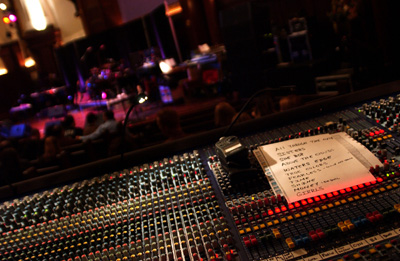 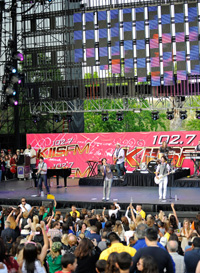 The Jonas Brothers play to a crowd during the annual Wango Tango concert.
© Charley Galley/Getty Images

A live sound engineer will cross paths with many different jobs in the course of putting on a single event. Venue managers, for instance, make their stages, facilities and employees available to the sound crew and have a vested interest in ensuring the event runs smoothly. But a live sound engineer must treat the premises with respect and acknowledge its ownership.

Musicians, artists and music managers often have strong ideas about how their groups should sound and what they need to be successful. A live audio engineer needs the talent to translate the idea of a sound into an actual sound. He needs patience and perseverance to work with such professionals under sometimes stressful circumstances.

For lots more information about sound engineering and related topics, check out the links on the next page.

The Aussie Didgeridoo May Be the World's Oldest Wind Instrument
5 Things You Didn't Know About 'London Calling'
Are Pop Song Lyrics Getting More Repetitive?