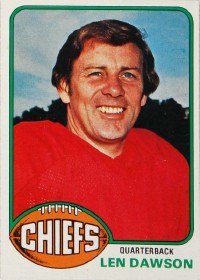 Len Dawson is among the elite passers of all time with an 82.6 passer rating. See more pictures of famous football players.

Len Dawson struggled for five frustrating seasons as a backup quarterback for the Pittsburgh Steelers and Cleveland Browns.

Being a backup was a difficult role for the former Purdue star, who had led the Big Ten in passing three straight years.

So in 1962, realizing that his lack of playing time would probably bring a premature end to his hopes for a successful pro football career, he asked to be released from his contract. Browns coach Paul Brown granted his request.

Immediately, Hank Stram, the head coach of the American Football League's Dallas Texans, signed the repressed quarterback, and the rest was history. "I felt Lenny was like sterling silver," Stram said. "He was tarnished but just needed polishing."

That year, Dawson (born 1935) led the Texans to their first AFL title, a 20-17 double-overtime victory over the Houston Oilers. For his efforts, he was named All-AFL, played in the AFL All-Star Game, was named the AFL Player of the Year, and won the first of four individual passing titles.

The following year, the Texans became the Kansas City Chiefs, and for the next 13 seasons Dawson was their highly polished quarterback. An extremely accurate passer, the Alliance, Ohio, native led the Chiefs to AFL titles in 1966 and 1969, which led to appearances in Super Bowls I and IV.

While best remembered for his MVP performance in the Chiefs' upset victory over the Minnesota Vikings in Super Bowl IV, Lenny actually had his finest season in 1971. That year, the always poised field general completed 167 passes for 2,504 yards and 15 touchdowns.

The Chiefs' hopes for a third Super Bowl appearance ended, however, when they lost the AFC divisional playoff game 27-24 to the Miami Dolphins. The game, which lasted 82 minutes and 40 seconds, was the longest ever played. During his Hall of Fame career, Dawson, who retired in 1975 at 40 years of age, completed 2,136 passes for 28,711 yards and 239 touchdowns.