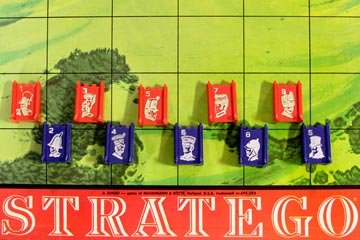 The spy may be the lowest-ranking piece in the game, but he's the only one that can remove a marshal (short of hoping said marshal will stumble into a bomb.)
Elizabeth Johnston/HowStuffWorks 2012

As war breaks out on your Stratego board, it's time to go on the offensive. Keep in mind that only one piece can be moved during your turn, so you'll want to expend a fair amount of forethought before you make each move.

To put your game piece in an attack position, move it to a space right next to an opposing game piece. A game piece can't jump over another piece, and it can't jump over or go through the lakes in the middle of the board, so moving into an attack position may take multiple turns to accomplish. The only time a game piece can muscle its way into an already occupied space is when it's attacking an opponent. Give your opponent's game piece a solid tap and prepare yourself for the outcome. You and your opponent must reveal the rank of your game pieces and if your piece is bested, it will be wiped off the board. But if it's triumphant, it will advance into your opponent's space and you'll remove your opponent's piece. If the pieces are the same rank, both are taken off the board.

There are a few exceptions to the movement and rank rules, though. Scouts, miners and spies each have special freedoms.

Scouts can move any number of open spaces in a single direction and can also make an attack during a single turn. Although scouts, with a rank of 2, can only take down spies, they're valuable for strategic strikes -- either by potentially sacrificing the scout to reveal one of your opponent's pieces or by making a swift, multi-space move to take out a low-ranking threat -- or to grab an unprotected flag.

Miners are valuable because they can disarm your opponent's bombs and remove them from the board; when a miner disarms a bomb, it moves to occupy the bomb's previous space on the board. Every other game piece, however, will suffer a deadly explosion if it encounters an opponent's bomb.

The spy is particularly lethal -- as long as it can evade capture. Unfortunately, becoming a prisoner of war is a very real risk for the spy because every other ranked piece on the board can capture it. However, it's the only piece that can attack and capture the top-ranked marshal -- provided that the spy is the attacker. It will be captured if a marshal attacks it.