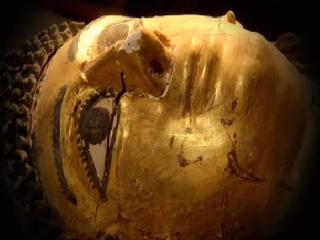 If you're curious about everything ancient and Egyptian, check out these videos to learn more about what their lives (and afterlives) may have been like.
Discovery

Senet isn't as straightforward as casting sticks and moving game pieces the appointed number of squares on the board. Strategy -- and a bit of luck -- come into play when you throw a number that would allow you to land on a square occupied by an opponent's game piece. This attack forces the opponent's piece to go to the spot where you came from, essentially exchanging places.

As you progress along the board in accordance with the number you cast at the start of your turn, you can jump over an opponent's piece or one of your own. However, you cannot put two of your own pieces on the same square; if a roll would land your piece on a space occupied by another piece of yours, you'll have to choose another piece to move so that you can avoid this. And keep in mind that there's an important exception to the jumping rule: If two of your opponent's pieces are in adjacent squares, you can't jump over the one closest to you -- or attack it. When two or more of a player's game pieces are in adjacent squares, each are protected -- while this can pose a problem if an opponent manages it, it can also play right into your strategy.

You can block another player by creating a wall of game pieces on adjacent blocks. Unless your opponent throws the exact right number to justify a multi-space leap over all your adjacent game pieces, he'll be stuck behind them and will need to wait for your pieces to move. If your opponent is near the end of the board and must go backward on the squares to complete his turn, but cannot because a wall of your game pieces that are blocking his movement, his turn is over -- even if he rolled a one, four or six [source: San Diego Museum of Man].

Also keep in mind that a player must have all his pieces off the first row (squares one through 10) to remove any of them from the board.