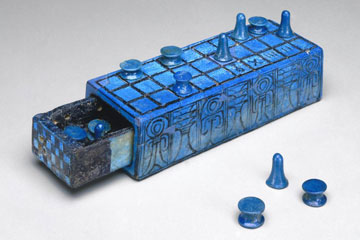 There's ongoing debate about the rules of Senet, as well as the exact meanings of the symbols on its board. Some ancient Senet game boards have blank squares, while others feature ornate symbols in every square. Despite these variations, there are five squares that have largely remained unchanged for 5,000 years. You'll find them on the last five spaces of the board. The rules attached to them here are the ones suggested by Egyptologist Dr. Peter A. Picionne.

When on the last three squares, if a player cast more than the number needed to move a piece off the board, he must move the extra number of spaces backward. For example, if a game piece is on Square 28, a player must cast a two to move the game piece to Square 30 and, subsequently, off the board. In this case, if he cast a three, the player must move the game piece forward two spaces to Square 30 and then backward one space to Square 29 to complete his turn. The first player to pass all of his game pieces over Re-Horakhty's square and off the board wins the game -- at the least. At the most, he is assured of safe passage through the netherworld and of eternal bliss in the afterlife [source: Piccione]. (More about the religious beliefs surrounding Senet later on.)

In addition to the last five squares on the board, two other squares often held a special significance. The 15th square, which frequently depicts a frog, is thought by some experts to signify the House of Repeating Life because a frog is the ancient Egyptian symbol for resurrection. Game pieces that land on this square can take an extra turn or remain safe from attack for a turn. Landing on the 16th square, known as the House of Netting, results in the loss of turn. Egyptians believed sinners in the netherworld would become tangled in their executioners' nets, so game pieces lose a turn to signify their torture and eventual annihilation in pits of fire [source: Astral Castle].