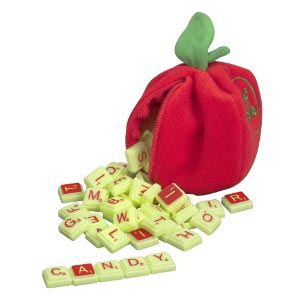 Instead of using a board, players of Scrabble Apple take their tiles out of a plush apple.
Amazon.com

Many people play Scrabble on a traditional flat board with the grid imprinted on it. Fancier versions of the board have a plastic overlay on the grid so that the tiles can stay in place. These boards are also set on a lazy Susan so you can spin the board around from player to player. From time to time other special edition boards are released to give players the opportunity to invest in a high-quality set.

Young children can enjoy a junior version of Scrabble that helps them match letters to words on the grid. As the children become more advanced, they can use the reverse side of the board to build their own words.

You can also take your Scrabble set on the road with a travel version. This folio edition comes in a zip-up case for easy travel. Letter tiles snap into the grid, so they won't move as you travel. Another highly portable version is Scrabble Express. Designed to last only 20 minutes, this small game has letters on dice that you roll to try to create words. A timer keeps the game from going too long.

Of course, you could be a purist and play Scrabble strictly as a board game, but there are also many electronic and online versions of the game. Whether you have a video game system, a smartphone, a PC or the Scrabble electronic pocket game, you have access to great word play.

Hasbro has also released a card game version called Scrabble Slam! This fast-paced game is for two to four players who race against each other to build four-letter words. Once a word is built, players lay down cards to keep changing the word, trying to get all of the cards out of their hand.

Another variation is Scrabble Apple, a Scrabble-like game without the grid. Letter tiles come in a plush apple, and players flip them over one at a time in a race to build words the fastest.

With its worldwide popularity, it only makes sense that Scrabble comes in languages other than English. Spanish, German, French and Swedish are just four of the 29 languages in which you can play the game [source: Mattel].