Browse the article How RoboRally Works 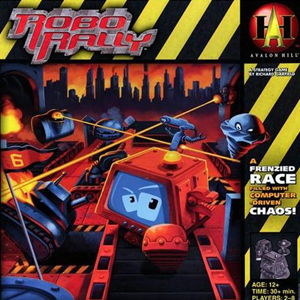 What's a bored supercomputer to do? Why, race robots, of course! See more pictures of toys and games.
Courtesy Buy.com

The concept of RoboRally is unexpectedly playful if you consider that the game is essentially about an automaton making miniscule, programmed moves. It's one of the first board games designed by Richard Garfield, better known as the creator of Magic: The Gathering. And while it may seem a far cry from role-playing games, you're actually taking on quite the part: All the players assume the roles of supercomputers controlling a robot that does their bidding.

But here's the thing: You're a brilliant machine trapped in a boring factory, forced to make widgets all day and yearning to have a little fun with your robot friends. So when the factory shuts down for the night, what else is there to do but plan elaborate robot races, pitting your tactical strategy against that of the other supercomputers?

Garfield actually devised the game before Magic: The Gathering, but it was met with skepticism from game publishers. After MTG became a huge hit for Wizards of the Coast, in 1994 they decided to see how RoboRally would perform. The game was met with mixed success; although its strategy was lauded, there were some serious hang-ups with players.

A few of those issues: the game could take an extremely long time, rookies to the game were designing floor plans (which determine the difficulty of the game) much harder than they realized and the game included "virtual robots" that added even more complication to the game. The game was given some expansions until 2000, when an overhaul was undertaken, ending in a 2005 reprint. The rules now included a timing element, more sample floor plans at many levels and the extinction of virtual bots entirely.

What follows is surprisingly entertaining for a board game that sometimes feels a lot more like coding a computer than strolling around Candy Land. The goal is deceptively simple: Your robot needs to touch all the flags around the factory floor, in order, before the other robots. To do that, you pick five cards that detail directions for your robot to move in to get to the flag. But the obstacles are many. There are walls and other robots to contend with, which can shove you off course, into pits and even off the board. There are conveyer belts that move your robot forward and gears that turn you around. And don't forget the lasers in the factory and on robots! If they hit you, you'll end up taking a Damage token and will receive one less card to program your moves with.

So what does it take to get a robot to move around here? Turns out, quite a bit. Let's briefly go over the different components of the game so we're not left wandering aimless around the factory floor:

That enough for you? Well, there's also the 10-page rulebook and a 23-page set of course manuals to choose from.

If you have five or more Damage tokens, your program cards become locked in one at a time as Damage tokens are received (in order from card five to one). That means you have to keep that movement on the next turn. Unlock cards by discarding Damage tokens in the reverse order they were placed.

When first setting up, pick a course from the factory floorboards. Check the rulebook; it has setups for easy, intermediate and expert courses. It'll also show you how to position the Docking Bay and flags. You'll get a robot, a Program Sheet and an Archive marker for play, along with three Life Tokens that go on your Program Sheet. (Damage and Power Down tokens can go next to the board.) Shuffle both Options and Program cards and then randomly decide the order of play. Whoever goes first puts their robot and Archive marker in Dock 1 and so on.

Deal the program cards; each player starts with nine. (A player will be dealt a card fewer for each damage point accumulated as the game continues.) Choose five cards you'll use to move your robot and put them face down on your Program Sheet (in spaces called "registers") in the order you want them executed. Call "done," and your cards are locked in. When all the players are finished, everyone will reveal their cards at the same time and start moving. While play proceeds simultaneously, you might find yourself conflicting with another robot. To figure out who moves first, check the Priority Number at the top of the card in question; the highest number goes first.

Now, this factory is filled with obstacles. Move them in this order: Shift Express (two-arrow) conveyor belts one space. Next, move the Express conveyer another space and the normal conveyer (one-arrow) one space. Active pushers then shove the robot into adjacent squares, and lastly, gears turn the robot 90 degrees.

You also need to watch out for bottomless pits -- try to avoid falling (or being pushed) into them. If your robot ends up on a laser tile, you get one Damage token per laser. (Only the robot closest to the source of the laser takes the hit, and you don't get penalized for moving through a laser). Robots have lasers, too, so any robot that's directly in the line of sight of another (with no obstacle or robot in between) automatically gets a Damage token.

If you made it this far and touched the flag, congrats! Put your Archive token on the flag; you'll reenter here if you're destroyed between this spot and the next flag.

After completing all five "register phases," it's time to assess the damage. If you're on a single-wrench space, get rid of one Damage token. If you're on a crossed wrench/hammer space, discard a Damage token and take an Option card. Read it aloud and keep it with you, face up.

And that completes one turn!

After you've looked at your cards, you can call Power Down, which means you can skip a turn. (It takes effect the turn after you call it.) Powering Down means you get to discard all your Damage tokens, but beware: Your robot is still able to take Damage, even if it's not moving on the board.

If you've played RoboRally by now, you know that trying to keep your robot alive and functioning can take all of your strategic muscle, without even attempting any flag-touching goal. In fact, that in itself may be a strategy: Just try to be the last bot standing.

When should you try that? It'll come in especially handy if you have some evil opponents who are more interested in picking off other bots than touching the flag. Avoiding the robots that are just trying to maim and kill is always best. (A good rule of thumb that also applies to humans).

If you're playing more of a game of strategy as opposed to all-out war, there's an advantage to being fast. Making sure you're actually planning the quickest way from point A to point B -- while being aware of what the robots around you are potentially up to -- is going to help you out. Remember that playing to touch flags and playing to stop the other robots at all costs are both fairly decent strategies; you might want to do an assessment of how the game is being played before you decide on either. You'll also need to decide if you want to capture Option tokens to get a boost, Power Down to mitigate Damage or get to a Repair Site to take away a Damage point instead of getting to the flag fastest.

If you're still jonesing for a more complicated game, expansions were released with the earlier versions of RoboRally. They include Armed and Dangerous, Crash and Burn, Grand Prix, King of the Hill and Radioactive. All are largely compatible with the new version and include items like new game boards, more Options or different obstacles.

And if you want even more practice, go online. Not only are there some pay-to-play options for multiplayer games, but there are also free versions to play against the computer. If you need more help, try out the fun -- and enormously helpful -- demo on the RoboRally official Web site. It'll give you or any rookies a good primer for how the game works, not to mention how the board is designed to "move."

When I told friends I was writing about RoboRally, most shared my skepticism that a game where pieces move in minute measurements was going to be rollicking. But it was my computer programmer and engineer buddies who immediately produced boxes of the game or waxed lyrical about how satisfying it was to get your robot to touch the flag. I remained skeptical; as someone with startlingly bad spatial logic and an impatient streak when it comes to complicated rules, I assumed I was doomed. But those logical engineers and programmers didn't have to get through one turn with me before I was hooked. Don't concern yourself too much with skill; stop worrying, and learn to love the robot.