Browse the article How Khet Works 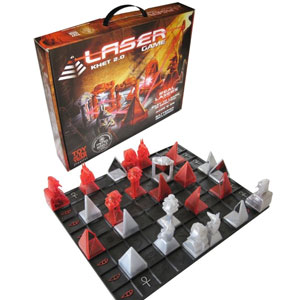 Khet is similar to chess in its strategy-based gameplay. See more pictures of toys and games.
Amazon.com

It's taken seven turns to put my Khet game pieces into position, but with my next move, I'll issue a death knell to my opponent's pharaoh and secure my place as victor. What I didn't count on, though, was an equally crafty approach by my adversary. While I was concentrating on total domination, he was stealthily maneuvering pyramids and scarabs into place to destroy my pharaoh instead. Clearly, I'll need a more effective strategy next time.

Even if the members of your social circle are more into "Call of Duty" than Monopoly, Khet just might offer a kitschy way to get them to game night. Decidedly low-tech when compared to computerized combat, Khet has one intriguing feature most board games lack: lasers.

Khet is a strategy-based board game in which two players fire lasers to strike and remove game pieces from the board. Each time a laser is fired, its trajectory is determined by the position of mirrored playing pieces. The object is to hit your opponent's pharaoh with a laser, thereby claiming victory, all the while protecting your own king. In this way, Khet is similar to chess. However, with only four moveable pieces and much simpler rules, Khet takes only a few minutes to master. Figuring out how to position your game pieces so they'll reflect laser beams onto your opponent's vulnerable pieces, however, is another story entirely. The good news is that since Khet only takes about 15 minutes to play, you'll have time to employ new tactics again and again.

An Egyptian-themed game, Khet takes its name from an ancient measurement used to mark the fields of Mesopotamia. A khet is comprised of 100 cubits, which is the distance from your elbow to the end of your middle finger. It's a fitting moniker for a game in which pieces march (or rotate, as the case may be) toward victory.

Since its debut in 2005, Khet has been getting plenty of attention, including a Mensa Select Award in 2006, and a National Parenting Publications Award and iParenting Media Award in 2007.

How to Set Up Khet

During Khet, your pharaoh-attack scenario will play out on a game board comprised of 80 squares. Each player controls a sphinx permanently positioned at a diagonally opposed corner of the board; the sphinxes are outfitted with red Class II lasers, which are similar to the low-power laser pointers used in classroom demonstrations.

The most recent version of the game, Khet 2.0, contains red and silver game pieces. Previous versions of Khet used gold and silver pieces, but players complained that the colors were difficult to distinguish in low light [source: Peterson]. The 13 pieces for each player, and their strengths or weaknesses, include:

All pieces, except sphinxes, can be rotated, or moved horizontally, vertically or diagonally to occupy an open square. In addition, a scarab can switch places with a pyramid or Anubis of either color, as long as it's in an adjacent square.

Once you understand the function of each piece, it's time to place them on the board. Khet's official rulebook offers a recommended setup for novices. Players who are familiar with the game can easily create custom start-game scenarios all their own.

More Than One Way to Start

Along with the recommended setups, there are also two other initial setups: Dynasty, billed as "an immediate balance of offense and defense that develops quickly," and Imhotep, a variation on the novice setup that offers a greater variety of defensive options.

How to Play Khet 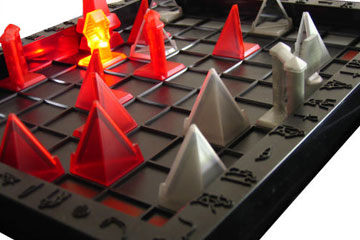 Thinking ahead is important when playing Khet.
Luke Hooper/Amazon.com

Khet requires players to plan ahead -- but just barely. About the time you think you've theorized how to bounce your laser off four other pyramids to strike the winning blow, the game changes because of continually migrating and rotating game pieces.

To begin the game, the silver player goes first. Each turn will have two actions. First, you'll either move a piece one square in any direction (as allowed by the game piece's limitations) or revolve a piece 90 degrees. Second, you'll use your sphinx to fire a laser. Before you fire, you'll want to map your laser's trajectory mentally, because it's surprisingly easy to take out your own game pieces.

If a pyramid is hit on its non-reflective side by a laser, it's removed from the game. The same goes for a pharaoh, or for an Anubis that is struck on the side. Scarabs and sphinxes are impervious to flying lasers. One potentially tricky rule to keep in mind: You have to fire your laser each turn, even if you've accidentally placed one of your own pieces in harm's way. The laser beam will make a right or left turn with each mirrored surface it hits, continuing until it runs out of reflective surfaces. The beam is designed to follow the rows or columns in a modular, rather than angular, fashion.

In addition to defending your pharaoh, your strategy should include creating a pathway of mirrors using your own pieces (or fortuitously placed opponent's pieces) so that when you fire your laser, it hits an opponent's vulnerable game piece. It's not as simple as maneuvering your pyramids and scarabs into position, though.

Opponents can block your plans by putting their pieces in your path, or by rotating their mirrors to send your laser at a different angle. Plus, there are certain squares that are off-limits. You can't put a game piece into a square that contains a red Eye of Horus symbol; this makes it more challenging to take out an opponent's pharaoh or Anubis successfully.

In rare cases, a game of Khet could end in a draw. This only occurs if the game starts to feel like "Groundhog Day" because game pieces end up in an identical arrangement again and again.

The History of Khet

Not every college assignment has a real-world application. For Luke Hooper, however, tackling a professor's missive resulted in a new career. A mechanical engineering student at Tulane University, Hooper was tasked with conceptualizing a technologically rich toy that would appeal to a range of ages. At lunch one day, he recalled his own childhood fun with lasers and diagrammed a laser-wielding strategy game dubbed Deflexion on the closest thing at hand -- a napkin.

While the concept didn't go from drawing board to reality in the course of a semester, it did capture the attention of Hooper's professor, Michael Larson, Ph.D., who, along with graduate engineering student Del Segura, helped develop the game. The trio formed Innovention Toys, entered business plan competitions, hosted tournaments and wooed reviewers. And by November 2004, Segura was in his garage hand-checking the first 5,000 games so the company could meet customer demand.

Despite Deflexion's inauspicious start, the game had grown into a viable cottage industry. It also caught the attention of another designer who claimed he'd already created a game of the same name. Rather than enter a trademark dispute, in August 2006, Hooper and company simply changed the game's name to Khet. They also changed its color scheme to red and silver, and added hieroglyphics to the board [source: Peterson]. By January 2007, an estimated 100,000 copies of Khet had been sold in the U.S. and U.K. [source: Jensen].

In 2011, Innovention debuted Khet 2.0. The game plays the same as earlier versions, but is not compatible with the original Eye of Horus and Tower of Kadesh expansions (a Khet 2.0-compatible Eye of Horus 2.0 is available, however). The game's most notable improvement was the addition of lasers to two stationary sphinxes. Previously, the lasers had been built into the board and were sometimes unreliable.

The original Khet game had two optional expansions: the Eye of Horus beam-splitter, which divided a laser into two beams, and the Tower of Kadesh, which introduced a second level of vertical play to the board. 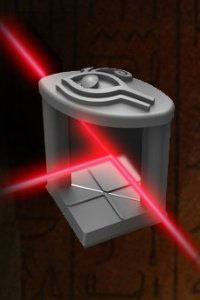 If you'd like to play Khet at your desk, while you wait in line or as you spend a few peaceful moments on the patio, try your hand at a mobile version. In January 2012, Schogini Systems, a Los Angeles-based company, released Khet 2.0 for iPhone and iPad. The apps offer one-player, pass and play, and online playing modes.

Regardless of whether you prefer an app or an actual game board, strategy is key. For effective results, begin the game by focusing on offensive moves. For example, place one of your scarabs directly in front of your opponent's pharaoh: It will be in prime position to bounce a deathly laser in the pharaoh's direction. Plus, your scarab offers an added bonus: Because of its dual-mirrored sides, it will simply deflect lasers instead of being destroyed by them.

Keep in mind that you'll also want to make use of reflective surfaces offered by your opponent's pieces. To be successful at Khet, you'll need to bounce lasers off your adversary's pieces as well as your own [source: Millen].

After the first five or six moves, try employing a mid-game strategy that adds a few defensive tactics. For example, protect your pharaoh by surrounding it on all sides with Anubis, pyramids or scarabs. It will be nearly impossible for an opponent's laser to reach it.

Be sure to watch the position of your pyramids, though. You don't want to leave their non-mirrored sides open to attack, and you don't want to inadvertently remove your own pieces with the push of a laser button. If you position a pyramid with its non-reflective side against an opponent's Anubis, it will be safe -- even in enemy territory. The Anubis pieces can't fire, so your pyramid won't get hit from behind.

Your end-game strategy should involve keeping an eye on stealthily placed opponents. At this stage in the game, it's remarkably easy for an opponent to blow away your pharaoh if you don't watch what he's doing.

A few weeks ago, I learned to play Senet, a board game that originated in Egypt around 3,000 B.C. Although Senet is interesting for its historical value, I think Khet is a lot more fun. You just can't go wrong with lasers that shoot from a sphinx. Plus, Khet is delightfully easy to take up. Like chess, it offers the challenge of balancing offensive and defensive moves. Unlike chess, this challenge occurs in a microcosm.

I once spent a weeklong houseboat vacation learning to play chess. Being moored -- and bored -- offshore still didn't afford me the time to fully master it. I had to keep a cheat-sheet handy, no matter how many times I played the game. In contrast, Khet's simplicity is part of the appeal. It's like eating hors d'oeuvres for dinner instead of meat and potatoes -- and sometimes that suits me just fine.