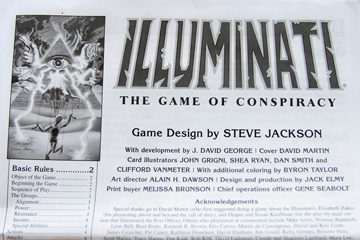 Seriously, there's really a section on cheating in there!
Photo by Elizabeth Johnston/HowStuffWorks.com

So far, we seem to be dominating the world swimmingly. We know how to take each turn, we know what the cards mean, we know how to get or destroy cards, and we even know where to put them once we've done all that. Consider us experts!

Not quite. As we've mentioned, Illuminati is nothing if not contradictory. For almost every action, there is an opposite action to counteract it, neutralize it or simply make it more complicated. In other words, it's probably going to take a few three-hour games to really get the hang of it. Keep your instructions handy, and you'll get it.

But once you've conquered the basic game, Illuminati doesn't let you stop there. There are tons of ways to make it even more mind-boggling. Written into the very rules of Illuminati is the stipulation that to make the game even more fun, you can play a nasty, duplicitous version simply by cheating. You don't even have to let the other players know.

If you're down for more complicating factors, take the secrecy of the Illuminati to heart and keep things hidden from each other. For instance, the game suggests that instead of using the pre-determined special goal for each Illuminati, have each player pick one goal from the list and spend the game bashing your head against the table trying to figure out who is going to win how.

Even more nasty? Don't let anyone know what your Illuminati card is in the first place. Sure, you can only use your own power, income, and special power -- but you can also draw less income, use less power or not use the special power at all to confuse your fellow players.

Illuminati is a terrifically complicated game, but the irony is that you can play it in a way where almost anything goes.