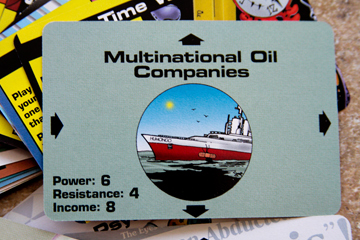 See all those outward-pointing arrows? This group would be a strong player in your power structure.
Photo by Elizabeth Johnston/HowStuffWorks.com

Now that you've got your cards and actions down, it's time to figure out the basics of how to manipulate your Illuminati groups.

Power structure in Illuminati is (predictably) somewhat complicated, but can help you strategize. When a group is attacked to control successfully, that group now becomes a "puppet" of the controlling group (referred to as a "master"). You can tell it's controlled because the puppet's inward arrow is now placed next to the outward pointing arrow of the master.

The closer your card is to your Illuminati, the harder it is for another group to attack. That's because you get an extra ten points on your resistance (power if you're being attacked to destroy) if your group is adjacent to the Illuminati. One group away is five points more, and two groups away is two points. (Anything farther doesn't get any extra points.)

Keep open control areas and that aren't infringing on other cards (in other words, make sure you have room to grow). It's also important to make sure that your structure isn't too vulnerable; having a lot of groups controlled by one branch of your Illuminati card leaves you open to an attack that could completely annihilate you.

One of the most important things to keep in mind when playing? Negotiate! Wheel and deal. Trade favors, make (and break) alliances, bribe, sell your protection or attacks. Beyond that, watch other players closely. See if you can convince them to conspire against others for mutual benefit--and then drop them when it suits you.

Because another fun thing about Illuminati? You can be as duplicitous and sneaky as you like. Read on to the next section for more ways to ruin the game for everyone else.