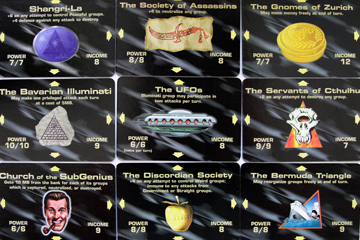 Illuminati cards have clever names and even more clever tricks up their sleeves.
Photo by Elizabeth Johnston/HowStuffWorks.com

Learning how to take a turn of Illuminati is probably harder than attempting to take over the world in real life. But now that you have a vague idea of how to play -- by controlling your own groups, destroying your enemies' and amassing money -- we can get into the nitty gritty of how to go about doing that.

As we mentioned earlier, when you first start, you'll draw one Illuminati card from the eight available. That'll be your Illuminati Group, and each has cool characteristics:

All Illuminati cards have a power number (used when you're rolling numbers for attacks) and an income number (that you'll collect on every turn). Next are the Groupcards. These are the ones you'll try to control and will draw on every turn. Some things to know about Groups:

Special cards (like the Time Warp card on the previous page) are also in the general pool. These give pretty straightforward advantages to the player who draws them, but follow the instructions for how to use them correctly. Note that you can only employ them once, and they can be traded, sold or straight up given away out of the goodness (or pure cunning) of your heart.