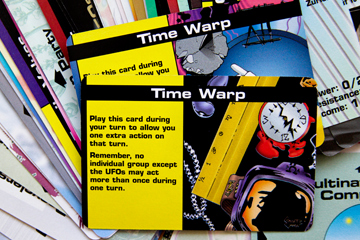 Special cards like this one are good to have at your disposal.
Photo by Elizabeth Johnston/HowStuffWorks.com

Since there are so many actions one must take in a game of Illuminati, it's easy to get confused about what to do when (and to whom). Here's a simple list of the actions you'll choose from on the third step of your turn. Remember, you can choose two:

First off, you're only attacking groups. That means that you're not attacking Illuminati cards themselves (those black ones that you start the game with). A player must announce who they're attacking; that is, you can't hide your intentions of what action you're taking. You also must say when you're attacking (so no saying you're going to attack someone and sneakily taking it back).

While you're adding and subtracting power and resistance numbers to determine the success of the attack, keep in mind that you can also spend your money to increase your chances of winning. One Megabuck adds one power point to you, making your odds of a victorious attack that much greater. You can also help or hurt another player's attack by spending your Illuminati money. (Group income can't be used.) For each dollar you spend, it affects the die by one point. You do need to declare when you're interfering. No covert aiding of the enemy.

As with every play in Illuminati, don't you worry; there's a way around it. You can declare your attack "Privileged" by discarding a Special Card, which means no one is allowed to interfere. Wait, Special Card? Yup, you still have a lot to learn. Let's take over the next section first, where we'll learn what those cards -- and the words on them -- really mean.