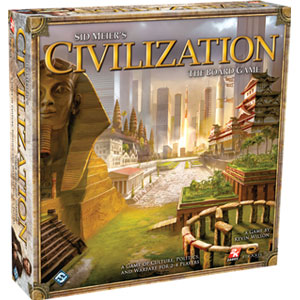 The fact that this box contains six full civilizations leads us to suspect that it's bigger on the inside. (The lush artwork throughout, by Norwegian digital illustrator Henning Ludvigsen, only deepens the illusion.)
Image courtesy Fantasy Flight Games

The fate of civilization hinges on your next decision, and right about now you wish you could look into a crystal ball and see the future. Should you ramp up your society's military power or concentrate on the arts? Explore and conquer new territories or attempt to reach outer space?

It isn't every day that you can dictate the rise or fall of an entire society, but then again, Civilization isn't an ordinary board game. Its players can't succeed through luck, but must instead rely on layers of strategy. Players take on the persona of a famous leader and then take turns navigating a complex game system -- including a series of map tiles, military cards and hundreds of other cards and tokens -- so that they can advance their civilization through the ages to reach a victory based on one of four tracks: Technology, Culture, Economy or Military.

Sid Meier's Civilization: The Board Game, which debuted from Fantasy Flight Games in 2010, is based on the popular "Civilization" video game series (specifically "Civilization IV") created by Sid Meier -- which was, itself, originally based on a board game. This current version retains much of the digital version's visual appeal. Fantasy Flight Games also produces the board game versions of video games like World of Warcraft and StarCraft, along with classics like Talisman.

Civilization's playing field, which consists of a series of map tiles and a separate market board used to track the players' progress, is colorful -- and the artistic images on the game's cards are quite detailed. Players use the game cards, tokens and modular map to create a (hopefully) great civilization; this is done by conquering enemy territory, settling in new lands, building new cities, attracting notable citizens, researching innovative technology, creating prosperous economies, erecting historical wonders and fighting successful battles. The game, which is intended for two to four players of ages 13 or older, takes about four hours to complete. (That's less time than the video game generally takes, but the video game isn't necessarily played in a single sitting.)

Although it carries a nearly identical name, Sid Meier's Civilization: The Board Game should not be confused with an earlier and simpler predecessor of the game offered in 2002 by Eagle Games that is now out of print. Nor is it exactly the same as "Sid Meier's Civilization" video game series or "Civilization Revolution" for the iPad, both published by 2K Games. By its very nature, the 2010 Civilization board game requires a hands-on approach and a more lengthy set-up and playing time than the digital versions. It was designed by Kevin Wilson, whose other notable games include Arkham Horror, Descent: Journeys in the Dark and A Game of Thrones: The Card Game. 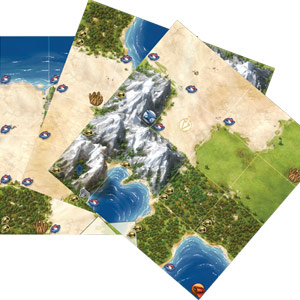 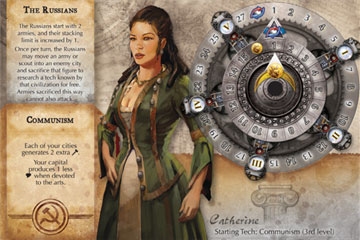 The progress of each player's civilization is tracked through the use of figures and cards on the map tiles, and by tokens and cards on the Market board. To win the game, you must be successfully complete one of the four tracks -- Military, Economy, Culture or Technology -- before your opponents each complete his or her own track of choice. You can build an enduring civilization and win the game by:

Each type of victory is achievable by each civilization, but it's wise to start the game on the path of least resistance by rolling with your civilization's initial strengths. As you follow this obvious progression, however, your opponents will attempt to block your progress through military action or other means. And that's when strategy really comes into play. Working a secondary (but no less powerful) plan can result in a win by building up a secret powerhouse. Technology, for example, can be quietly collected as you pursue a more obvious objective and then employed during a last-round bid for success [source: Goodhead].

And sometimes the best defense really is a good offense. A valid way to defend your capital city is to attack your opponent before he reaches it -- if you have sufficient fighting power to successfully trump your enemy. If you lose, and lose your army cards in the process, your capital city will be left unprotected.

Keep in mind that battles are won not just on the number of army cards each player has, but according to a civilization's accumulated battle powers. (And you'll quickly learn that Civilization's military action doesn't always follow traditional rules. In fact, sometimes it seems almost comical: Footmen can destroy tanks and archers can shoot down airplanes [source: Three Wise Men].) Even if you lose a battle that takes all your army cards, you could still triumph because of your city's defenses, bonuses from barracks or academies, or the expertise of a great general. The possibilities are (purposefully) endless, and it may take a few games before you start to get a feel for how to balance your resources.

The Making of the Game

For a glimpse into the creative process, check out the series of blog entries that Fantasy Flight posted surrounding Civilization's release, including design diaries by Kevin Wilson and lots of hints about how to dominate your opponents. 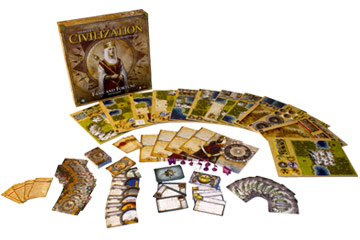