Browse the article How Checkers Works 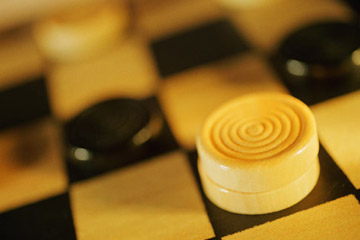 Checkers is a seemingly simple board game that has been around for thousands of years, but it has a complexity that makes it a classic.
Diane Macdonald/Stockbyte/Getty Images

Checkers has been capturing the minds of board game fans around the globe for thousands of years. It is known as a mind sport of kings and men because of its depth and simplicity. Despite its apparent straightforwardness, the game has been studied and theorized to nearly the same extent as other classics such as chess or backgammon.

The earliest recognizable version of checkers dates back to an Egyptian game called Alquerque, which uses a five-square by five-square board and has similar jumping moves [source: Avedon]. The game has since traveled across the globe in different iterations, from the French version known as Fierges to the English version known as draughts [source: Walker]. It has even made an appearance in Greek literature, mentioned by Homer in the epic "The Odyssey" when some haughty suitors are caught "amusing themselves with games of draughts" [source: Homer].

The size of the board has changed over the course of history but has settled on two different variations: the 100-square board used in many European countries and the 64-square board used in American checkers. The rules of the game have also changed as the game has made its way from country to country, but the main rules have remained the same since the introduction of the mandatory jump, a rule we'll be looking at later on in this article.

On the surface, checkers may appear to be a simple game. It has no diversity in its parts, with just two colors and a seemingly simple premise: Remove your opponent's pieces from the board by jumping over them before he can remove yours. However, it is a game that combines strategy, forethought, mathematics and nearly 500 quintillion different combinations of moves [source: Cain].

Checkers can be as complicated of a game as you make it, and over the course of this article, we'll be looking at its basic rules and different strategies for approaching the game. But to get us started, we'll first take a look how to set up a board.

How to Play Checkers

Although checkers tournaments and competitions exist, it's a game that can be played anywhere by everyone -- from back porches to grassy parks to the backseat of a car (though you might need a magnetic travel version in this case). It has the classic of appeal of being easy to learn and difficult to master.

You can learn how to play checkers on your own or with another amateur partner once you have the foundations for how the game works. Although books of strategies and move sets exist, it's best for the beginning player to wrap his head around the basics first. Although a checkers master can be insightful to the learning process, it's a game founded on the idea that anyone can pick it up and play it.

Checkers is a two-player game in which each player gets 12 discs of either a light or dark color. A standard U.S. checkers board consists of 64 squares that alternate between light and dark colors, typically black and white or black and red. The board size is the same as in chess, and often the games are packaged together.

To set up a game, each player places his 12 discs on the dark squares closest to him, taking up a total of three rows. Once the board is set up, the players alternate making moves across the board.

The object of checkers, like most games, is to win. You win by capturing all of your opponent's pieces -- without all of yours captured in the process -- or by leaving the opponent with no legal moves. We'll look thoroughly at this in the next section.

If you don't have a board or pieces lying around the house, don't worry -- computer checkers is as common as computer chess and is easy to find online. On top of being great teaching tools when learning the rules of the game, computerized versions can be excellent practice for newcomers and old hands alike. Computers and checkers also share an interesting connection, which you can read more about in the sidebar on this page.

Up next, find out more about the two basic moves involved in checkers, and when you don't get a choice in making one.

In 1951, British computer scientist Christopher Strachey led some of the first successful artificial intelligence research by building a computer program that could play a game of checkers. Since then, checkers has played a major role for programmers and artificial intelligence. In 2007, a program called Chinook was proven to be unbeatable by any human opponent. Created by University of Alberta scientists in 1989, Chinook uses algorithms to play out all possible variations in a match, so even the world's greatest players can only hope for a draw -- at best -- against it. At the Checkers World Championships in 1994, Chinook also became the first computer program to win a human championship [sources: Cain, Schaeffer].

In nearly all modern iterations of checkers, the rules for starting a game are the same: The darker color moves first. Figuring out which player gets which pieces is a different story. There is no set rule here, so you'll have to flip a coin or take turns going first.

Once you've decided who moves first, it's time to figure out how to move. There are two types of moves, but at the beginning of a game, you'll have only one option: to move one space diagonally forward. This is called a non-capturing move. If you aren't able to capture any pieces, you can move any of your pieces one square forward. Each player is allowed to move one piece per move.

If you're in position to make one of these capturing moves, you have to make it; however, if you have multiple capturing moves available to you, you may choose which one you'd like to pursue.

Eventually, at least one of your pieces should make it to the other side of the board. This means it will be crowned a king by having one of your previously captured pieces placed on top of it. Now you can move this piece diagonally forward or backward to capture pieces or block your opponent.

As we mentioned earlier, the directions, objects and rules are fairly straightforward, but like the best games, checkers has a deep strategy that has kept people playing for centuries. We'll look at some of these strategies in the next section.

Checkers is far more advanced than people might realize when they first start out. There are numerous strategies and play styles to consider.

When studying checkers strategy, you'll first need to understand checkers notation. Notation is used to mark spots on the board, and it's used in shorthand to record classic games. If you're playing the darker color, the notation starts by numbering off the dark squares across the bottom from right to left and moving up the board in that pattern. So, your first square would be a "1" in the bottom right corner. If you're playing white, the notation starts with "1" at the top left, moving across to the right and then down the board, like reading lines in an English-language book.

A move is recorded by first listing the origin square and then the landing square. So, the first move of a game might be something like 12-16, which would be taking the dark piece that is farthest left in the third to bottom row and moving it one spot diagonally forward and to the right. Jumps are typically marked with an "x," so taking the same piece from the first example and jumping an opponent piece would result in 12x19.

Blocking in checkers is an important strategy in winning. It's useful both to frustrate the opponent and to delay any plans he starts to lay down. Blocking requires moving your pieces to locations on the board that prevent your opponent from jumping. The trick is in figuring out your opponent's plans -- not an easy feat by any means. Checkers is all about planning ahead, though, so it's a useful skill to learn.

As with any strategy, planning your potential moves in advance may be the best way to win a game. If you can predict what your opponent may be up to, you can learn to block or set traps for them. Traps can include things such as exploiting the forced capture rule, in which you sacrifice one of your own pieces to get to more of your opponent's, or a side route strategy, in which you block the chance for your opponent to jump you by hugging the side of the board.

There are thousands of possibilities and nearly as many strategies for playing a good game of checkers. Check out the next page for lots more information on playing and winning at checkers.