Browse the article How Carcassonne Works 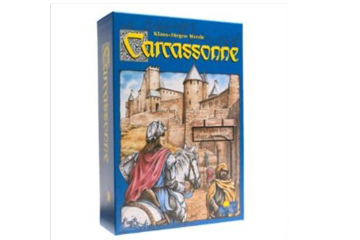 It's not just an old French town; it's a gaming revolution!
Courtesy Amazon.com

They call it a gateway game, and it's not that different from a gateway drug -- that is, a simple product that can, on your very first try, turn into an obsession that leaves you scratching at your skin, shouting nonsensical things about too few meeples left to occupy your precious cloister.

Carcassonne is, on the surface, a rather simple board game. You and your opponent(s) lay tiles that, when strategically placed, form cities, farms, roads and cloisters. To get points, you put tiny wooden game pieces called followers -- or meeples -- on the tiles to lay claim.

So what is it about the game that causes such passionate addiction? Some point to meeples, which have an almost cult following that surely surpasses any rabid fans of, say, Candy Land's Lord Licorice. You can buy custom-made designs (for those who want their camo-painted meeples to blend into the background) and have an award named in their honor (Meeple's Choice Awards, honoring favorite board games), and they've now become a generic identifier of European board games.

Of course, if a board game was mainly popular because of its figurines, nobody would ever play Monopoly. (Who in their right mind wants to represent their competitive gameplay with a thimble or an iron?) Carcassonne -- which won the Spiel des Jahres in 2001, the most prestigious award for game design -- has an allure that seduced Europe and is slowly gaining followers (no pun intended) in the United States.

Board games have been around for at least 5,500 years, the earliest having been found in Egypt [source: Curry]. In general, we use games for entertainment. Along with simply having fun, people get a visceral feeling when they triumph over opponents -- and, on the other hand, when their maniacally competitive sister-in-law crushes them, once again, on the last turn of the game. Either way, all the players are creating a shared experience and memories that create a sense of community, while also giving each person a distinct role as a player [source: Curry].

The French-Germanic Origins of Carcassonne 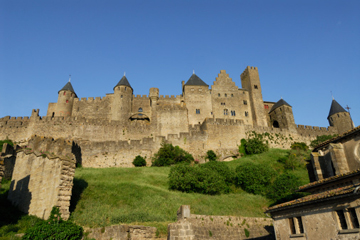 The fortified city of Carcassonne inspired a gaming revolution.
©iStockphoto.com/Thinkstock

It would probably come as no surprise to you that a game like Carcassonne -- simple and without a hint of technology or modern characteristics -- was created hundreds of years ago on medieval battlefields and played for centuries without addition or change.

So prepare to be shocked when you learn that Carcassonne is about as old as your favorite Disney star. Originally published in 2000, the game was created by German designer Klaus Jurgen-Wrede. His inspiration was a trip to the south of France, where he studied the trail of the Albigensian Crusade (a religious war in the 13th century). Carcassonne -- a city in France that featured heavily in the Crusade -- is an extremely fortified city, surrounded by walls and dotted with castles.

"So the idea came on this journey, to develop a game, which imitates the growing of the cities and castles ... Then I tuned a little bit with the tiles: the balance of the quantity of city-parts, ways, crossings, so that an interesting game play could work," says Jurgen-Wrede [source: Brettspillguiden].

Carcassonne is considered a classic German-style game, a term that makes you picture a game board covered in bratwurst and lederhosen. But it just means that the game captures the strategy and style of play of a similar group of games made popular by German designers. Some of the things that set German board games (sometimes called "Eurogames") apart are [source: The Economist]:

Germans got all game-crazy in the 19th century, with some speculating that the cheap nature of the entertainment helped its popularity spread [source: The Economist]. In 1995, Settlers of Catan (another German export) was released; as of 2012, 15 million game sets have been sold so far [source: Curry].

Board games may seem like only fun and (ahem) games, but there's actually a flourishing movement to study them seriously. The International Society of Board Game Studies, The International Board Game Study Association and scholarly journals like Games and Culture study the educational, sociological and psychological aspects of board games. These studies have found that board games both mirror cultural traditions and pass them on to newer generations [source: Whitehill].

But enough history -- Let's learn how to play the game!

Let's play our own small version of Carcassonne so you can get an idea of how it works. For this purpose, let's just pretend you and I are playing right now. (It's important to note that while there are previous versions of the game with slightly different rules, the ones we discuss throughout this article are the most recent, so-called "3rd edition" rules).

First, we'll put all but one of our 72 tiles face down in piles; you'll know the starting tile by the lighter-colored "C" on the back of it. These tiles all feature some aspect of the French countryside: a field, farm, castle, road or cloister. I'll draw a tile from the face-down pile and find an appropriate place to match it up to the first tile. The tile must "fit" with the existing tile: A road needs to connect to a road, a wall of a city must connect to another wall, a field must be placed green to green, etc.

Now I'm faced with a decision. I have eight followers (or meeples). I can place a follower on the tile I just laid, which would mean that I'm betting I can build up the area around this tile with a road, city, cloister or farm. However, I can't take my meeple off it until one of these features is completed (i.e. connected road segments, a completely walled-off city, a cloister surrounded by nine tiles, etc.) After I've decided to place or not place a meeple, it's the next player's turn, and so on until all of the tiles are placed and the game is over.

Keep in mind that you can only place meeples if no competing meeples are present and that once the feature has been completed, you get your meeple back. Here are more details on meeple placement and scoring:

After all the tiles have been positioned, scoring takes place on fields and incomplete structures, like so:

In a nutshell, that's Carcassonne. But we'd by lying if we said that's the end of it. Read on to learn more about the game and the strategy a crafty player like you can employ.

What's in the box?

When you open the basic game of Carcassonne, you'll find 72 land tiles, 40 followers (or meeples) of five different colors, a rule booklet, a summary sheet and a scoring board. You'll use one of your eight meeples to keep track of your score on the scoring board, moving your little lad or lady depending on your points amassed. Keep those seven remaining meeples at the ready to pounce on strategic tiles as the game progresses.

Getting a grasp of Carcassonne is one thing; but if you want to win, you can't simply rely on a general understanding of the rules. Like most German board games, Carcassonne employs more strategic placement than a nude scene in a PG movie. While that can involve where to put your tiles, the real strategy kicks in with meeple placement.

Just like a cruder game -- dodgeball, say -- Carcassonne can be played either offensively or defensively. On one hand, you can simply try to build up the most cities, roads, cloisters and farms. You'll gain points by amassing tiles. If you're more aggressive (or perhaps vindictive), you'll find yourself wanting to plot ways to steal power from the other players. That might mean placing tiles to thwart a rival's road or taking over a city by clever placement of a tile [source: Vasel].

If you're a kinder, more caring person (or you're simply so far ahead that you don't see the other players as a threat), it's also possible to share points by working with someone else to build a city. By placing opposing meeples on non-adjacent tiles and then building the cities into each other, you can share points (as long as no one has more meeples) and perhaps even complete the city faster with the luck of two draws.

Of course, you'll also want to ensure that you're placing farmers in fields so you'll have a strong end game. Remember that farmers, unlike knights, monks and thieves, remain in the field until the end of the game and can garner you points based on how many completed cities they "supply." You have to think about how many points you'd like at the end of the game versus how many meeples you'll be tying up.

Which brings us to a huge part of Carcassonne strategy: striking the balance between collecting points during the game and amassing them for the final score. To say that there's a strong opinion from gamers on this subject is an understatement. Go on any Carcassonne forum to find a litany of opposing views, each as passionately argued as the next.

Here are a few things that might help you dominate an end game:

You think playing Carcassonne with your most competitive friend or unnervingly strategy-minded sister-in-law is hard? Then don't bother joining the Carcassonne World Championships, held in Germany every year during the Essen (Essen Internationalen Spieltage) game show. Not for the faint of heart, the tournament includes timers, emcees and participants from 20 different nations who have proven their Carcassonne cred in their native country.

So you've played Carcassonne and you're totally enthralled. You've collected tons of points during the game, you've hoarded points for the end game and you've memorized tiles so you know exactly what's left in the pile by the end. You've cleaned the cloister floor with everyone you've played.

If you think you've already exhausted all that Carcassonne has to offer, then you're as clueless as a meeple without a tile. Because while we've just covered the most basic game of Carcassonne, there are still a whopping 19 expansions that you can add to spice things up.

Expansions often include new tiles, meeples, pieces and rules. They're not standalone games; they're simply additions to the most basic game. You can add more than one at a time if you really want to make things interesting (or have hours and hours to kill).

Here's a list of some of the most popular expansions and what they offer:

Mini-expansions (Carcassonne: The River or Die Katharer) are also available. These generally just include a few extra tiles that allow for a new feature and scoring opportunities, as opposed to the larger expansions with rule changes.

If you've conquered Carcassonne analog, consider the many versions that are now offered digitally. Xbox has a version of the game (including expansions) that can be played on Xbox or Xbox Live, and there's also one for Windows. If you want to play Carcassonne digitally with friends, there's a Facebook platform for the game, as well as a smartphone app ($9.99) that allows multiplayer setup (or computer players if your friends have had it with your Carcassonne obsession).

Not had enough yet? Place your meeple on the next page to lay claim to loads more information about Carcassonne, as well as other brainy board games.