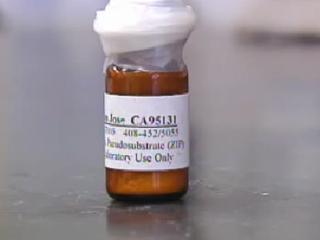 How can lab rats help scientists to discover how memory works? Can the use of an inhibitor drug make humans forget what they know? Learn more in The Science Channel's "Brink: Understanding Memory."
Science Channel

It's often said that the brain is like a muscle: You have to exercise it to make it stronger. Of course, a lot of the ways we use our brains involve memory. Most of us have used flashcards and other memory aids to study, whether back in school or, later in life, for business. A whole industry is built on making memory-related learning as fun and painless as possible, whether you're studying science, a new language or just about any other topic.

But what you may never have thought about is the way many of our leisure activities -- games, both competitive and solitary -- also contribute to firming up those mental muscles. It's those fun activities that language trainers and other memorization aids are trying to mimic.

Think about it: You may not remember where that ace of spades was weeks after you played your card game, but you were still giving your brain a mini memory workout. Just as lifting weights regularly can improve your strength, playing memory games can be the mental equivalent to pumping iron.

Let's talk about a few different kinds of memory -- and the games that test, stretch and improve them. 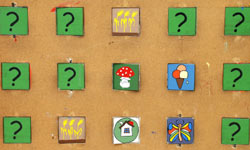 Concentration, also called Memory, is a popular game with kids and adults alike. Trying to remember where you saw a card once it has been turned face down is an excellent memory workout.
©iStockphoto.com/Suzana Cotar

The game some call Memory and others Concentration -- in which we have to remember the location of objects or cards and either match them or find them in sequence -- is one of the oldest and most basic memory games. This game makes use of the sequential memory we normally use to put on underwear and grab our keys before leaving the house every morning, but it also increases our skill at remembering exactly where those things are.

The same memory function in play with Concentration is also what we use when studying vocabulary or other facts with flash cards. The way we play Concentration -- turning up cards, looking at them, and turning them facedown again -- strengthens our memory throughout the game the same way that studying with flashcards does, by providing reinforcement of the information itself, and the promise of reward (progress) when we get the answer right.

As any student can tell you, it's always better to work with the promise of incentive. Not only does it motivate you to keep playing the game and improving, but it also assigns meaning to the fact or card, because you form an emotional attachment to the information it contains -- in this case, winning the game or acing an exam. Without a personal meaning, no single fact or object will remain in your memory for long, which is why incentives are such a powerful study tool.

While not all of us are artists, we all use complicated visual and locational memory in our daily lives. Kid games like "spot the difference" pictures bring this skill to the forefront. We're using the visual cortex to scout and remember facts about a visual object that we can later recall. Of course, artists of all kinds use this kind of memory -- even dancers and other physical performers -- because it's essential to most art that we be able to visualize our subject.

Because these skills are so important, we use a lot of games to teach children this kind of visual memorization. The game that starts with "I spy ..." is one example, and visual and object memory are a huge part of many parlor games, reaching back to Victorian times. In recent years, the popularity of the "Elf on the Shelf" book (and the elf-on-the-move game that goes with it) has given families the opportunity to bring a little memory game fun to the house at Christmas time. 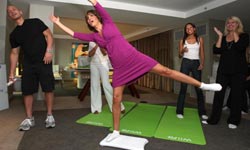 "Wii Fit" kicked off the fitness gaming revolution, and few people playing were any the wiser that their memory function was also getting exercise.
John Shearer/WireImage/Getty Images

Dance steps, video gaming and other repeated physical activities use a third kind of memory, called kinesthetic memory. Lots of popular toys, like Simon or Boppit, also bring visual and spatial memory into the mix, demanding that we remember not just facts and stimuli, but quickly use our reflexes to duplicate sequences through movement. And, as in a demanding dance class, the greater repetition and speed with which you perform means greater muscle strength and muscle memory, so you're exercising mind and body at the same time.

Video games especially have long been associated with this form of memory. The old (and true!) cliché that video games improve hand-eye coordination is one example of this mental ability to express with our bodies the things our minds remember. And in recent years, the development of full-body gaming systems that use infrared lights to measure our movement has brought this experience to a new level.

From exercise games like "Wii Fit" to dance games like "Dance Dance Revolution" and the more recent "Just Dance" series, as well as movement games for younger kids, the exploration of kinesthetic memory in gaming has done a lot to highlight the many positive effects video games can have.

One of the most important events at most memory championships and similar events is a game in which the competitors are asked to match hundreds of face photographs to subjects' first and last names. We've all had friends who say they're bad with names -- and some of us probably are that friend. While it's true that a capacity for facial recognition varies, like any other mental skill, from person to person, it's also an important skill to have and develop. Socially and professionally, from childhood through our adult lives, we're constantly in situations where it's helpful -- even critical -- to put names with faces.

By teaching children to remember facial features and expressions, we give them a hand up not only in this major skill, but also in reading other peoples' emotions, both subtle and overt. While some kids take longer to understand the link between facial expressions and internal emotion, it's more important than ever -- now that so much of our communication takes place verbally -- to make sure those subtle physical and facial cues are part of their social arsenal. While an ability to remember names is an important talent in business and the educational world, an understanding of facial responses helps us navigate life immeasurably -- and a child with a strong background in understanding those emotional states becomes an adult with a much more highly intuitive understanding of their encounters, which means fewer disagreements, interpersonal confusion and other obstacles to fun and profit. 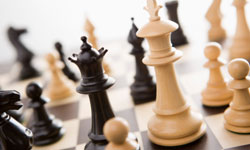 What most chess players would call strategy is really a complex use of memory to analyze the other player's behavior based on their previous moves.
Bananastock/Thinkstock

Most classic games that we don't think of as memory games actually strengthen our recall just the same, often giving a workout to our sequential memory. For example, while true "card counters" are rare -- and generally distrusted -- almost any card game requires us to remember which cards have already been played, in a basic way.

But what about games like Clue, 20 Questions or even chess? In each case, remembering what's been played, guessed or ruled out is essential to knowing how to move forward. On a more sophisticated level, the best chess players are able to amass an understanding of their opponent's behaviors as the game is being played.

Or consider the Rubik's Cube. You could look at it as using very complicated locational memory -- remembering where each of the squares along the outside of the cube is located, and how to move them correctly -- but in practice, the Rubik's Cube is a bit more like chess. Remembering where you've been, and how to get back to a previous state once you've hit a brick wall, takes up more mental power than any other aspect of the game.

In all cases, however, it's a complicated mixture of physical, sequential and visual memory that games help us strengthen -- and, if you're having fun, you might not even notice.