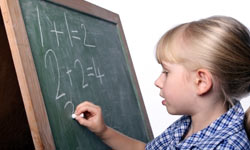 Some curricula use games instead of drills to help kids learn math.
©iStockphoto.com/pamspix

You might think math games are just for kids. After all, hundreds of games have been invented to get children interested in arithmetic, and game-based math exercises are popular in many schools. For example, the Everyday Mathematics curriculum, taught in 220,000 U.S. classrooms, uses progressively harder games to supplement math drills. The games have proven effective at helping students permanently improve their math skills. And even simple board games like Chutes and Ladders can help young children learn to count.

Other math games, however, can be enjoyed by players of any age. Many adults, for example, play challenging math games in order to keep their minds sharp as they grow older. Most just like them because they're fun. And they offer keen competition and social interaction, too.

Games involving math force you to use your brain's full power, and some have been challenging people for centuries -- an Egyptian papyrus from 1850 B.C., for example, contained a form of mathematical game. The math games on this list may test your agility at using numbers, or teach math ideas and functions as you play. Either way, get ready to use your noggin. 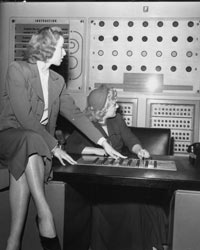 At the 1951 Festival of Britain, the NIMROD computer -- a digital computer designed specifically to play Nim -- made its debut.
John Pratt/Hulton Archive/Getty Images

At first glance, Nim seems as simple as tic-tac-toe, and can be played almost as quickly. In fact, the game is much more subtle and difficult. The play involves two players alternately taking away items from five piles containing one, two, three, four and five objects. The player who takes the last piece wins.

On a turn, a player must choose one pile from which to take pieces. He or she can take any number of pieces from that pile, but must take at least one piece. The key is to keep in mind how many pieces are in each pile, what your opponent's options are, and what the number in each pile might be several moves ahead. For example, you have to prevent your opponent from leaving you with only two piles with one piece in each. Planning and calculating are essential.

The name of this game comes from the German word for "take," and games similar to Nim have existed for centuries. A Harvard mathematician "solved" the game in 1901, calculating a perfect winning strategy using a binary number system. Even the earliest computers were able to play the game. It's claimed that a 1942 invention for playing Nim may be the oldest electronic game in existence.

Usually the game is played with five piles. You can use matches, coins or just marks on a piece of paper. Playing with different number of piles is also possible. And you can switch the whole game around so that the person who takes the last piece loses.

It sounds simple, but Nim strategy is very tricky. You'll find your head spinning with numbers as you try to take, and leave, the right number of items. There is no easy formula to guide you, just your feel for the game.

In 2004, Japanese educator Tetsuya Miyamoto invented a game he thought would help his students hone their math skills. He named it KenKen, a variation on ken, the Japanese word for wisdom. In 2008, Reader's Digest introduced the game to America, and The New York Times began to print versions of the game every day. Other newspapers followed suit, and the game became widely popular.

The goal of KenKen is to fill in a square grid with numbers. The key restriction is that no number can be repeated in a row or column. The squares range from 3 by 3 to 9 by 9, and the numbers used to fill in the grid are the same as the dimensions of the square. For example, a 5 by 5 square uses 1,2,3,4 and 5.

To some, this will sound very similar to another game popularized in Japan called Sudoku. But KenKen adds a twist. Within the square, certain cells are marked off by darker lines. The numbers inside these "cages" must, using an arithmetic function such as addition or division, produce a target number. The function and the target number are specified for each cage.

The game can be simple or hard depending on the size of the square and the design. Requiring a combination of simple arithmetic and complex logic, some large KenKen squares take hours to solve. 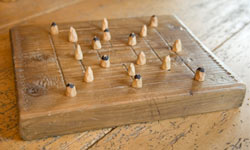 The Internet is loaded with games to make math more interesting to learn. Most are aimed at students, and their purpose is to convince kids that math doesn't have to be boring and difficult but can be challenging and fun. The games come in many levels that correspond to how much math the player has learned.

"Math Blaster" is one of the most popular versions. In this Web-based computer game, the player is a recruit at Blaster Academy. He or she designs an avatar, then heads off on missions, interacting with other characters in outer space.

Achieving the game's objectives requires knowing and using math concepts. The player builds credits that increase his or her powers in the game by solving math equations. The idea is that kids are too busy having fun and zapping aliens to notice that they are also engaged in math drills. They can move to increasing levels of difficulty, from kindergarten to sixth grade, as their math skills improve.

"Math Blaster," developed by Knowledge Adventure, Inc., is free, though a paid membership offers more advanced levels and access to other games. 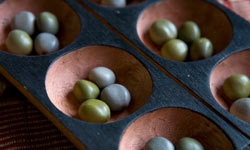