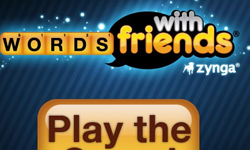 Both Scrabble and Words With Friends are, well, word games, but the rules aren't interchangeable. See more pictures of toys and games.
Screenshot by HowStuffWorks.com

Sure, you had been playing Scrabble for years. The family took it out to combat an otherwise boring rainy afternoon, or friends used it to give game night a bit of an intellectual edge. The occasional game was happily played, by the rules.

And then came Zynga's Words with Friends, the extremely popular app that allows you to compete in -- let's say -- "Scrabble-like" games with your buddies or even strangers. Playing word games became less of an interest or hobby and more of an obsession. And suddenly, 20 million people are playing the game with each other, one word at a time [source: iTunes].

Now let's make one thing clear: Words with Friends defines itself as a "word game." That is, not a Scrabble game, which is trademarked by Hasbro. But while most of the game play seems nearly identical, there are some key elements to Words with Friends that vary. Those variations, should you make them a habit, can really hinder your Scrabble game.

We'll look at 5 of them that can make your Scrabble game go from bingo to zero.

Pretend you're pitching in a baseball game. The hitter comes to the plate, and, not knowing what kind of hitter that player is, you throw her a fastball. When she hits a double, you get to send her back home to redo the at-bat, giving her a slider this time.

Essentially, that's what Words with Friends lets you do every turn. In Scrabble, putting down your tiles to make a word means you're done. The word can be challenged and looked up; if it's not in the dictionary (or a Scrabble-approved word list), you're out of luck -- and a turn.

When playing WWF, you're given the option of putting a word down and submitting it. If the word isn't on the approved list, WWF asks you to choose another valid word (very much unlike your cutthroat Scrabble opponent, who would pounce on your mistake and make you pay). This means you can submit combination after combination until you happen to stumble upon a word like "eagre" (a tidal flood), thus impressing your friends with your lexical grasp. 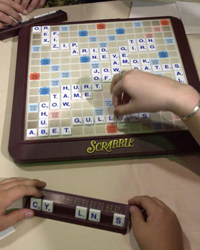 When switching from Words With Friends to Scrabble, keep in mind that their approved word lists differ.
William B. Plowman/Getty Images News/Getty Images

Saying that Words with Friends follows a different dictionary than Scrabble is tricky because Words with Friends doesn't really release a list of all the acceptable words in the lexicon. The Words with Friends site refers to the Enhanced North American Benchmark Lexicon (ENABLE), a public domain list, as its source, but it also admits to adding words like "texting" or "Zen" as it sees fit. Much like in Scrabble, proper nouns, abbreviations, prefixes, suffixes and words that need a hyphen or an apostrophe are no-nos. Unlike Scrabble, derogatory words or slurs are not allowed.

Many grumbles were heard about Scrabble allowing two particular words --"za" and "qi" -- in their game, while Words with Friends didn't. It appears that Words with Friends has now added those as acceptable. Another bad habit you might develop with Words with Friends: You can update the app, and more words might've been added. Those with older versions might have different words.

So it's best to familiarize yourself with Scrabble's acceptable word list (the Official Tournament and Club Word List) before plunging into a competitive game.

Hurry Up and Wait

You'll find that playing Words with Friends will leave you with the impression that Scrabble games are leisurely affairs. You stare at your letters for ten minutes, sigh a few times, watch an episode of "Sister Wives," stare at the letters for another ten minutes and then maybe get hit with a stroke of inspiration that you can spell "polygamy" from a hanging "y" on the board and get a bingo. Or maybe you go to sleep and look at it the next morning.

The point is, Scrabble doesn't allow you the luxury of endless thought. Your opponent, one can assume, would probably be annoyed if you took a television break. Decisions must be made within a reasonable time frame. Get in the habit of not being able to quickly assess your rack for words, and you're on the losing end of a faster-paced Scrabble game.

On the other hand, remember that Words with Friends can also get you in the habit of checking your game at a red light and putting together a word before it turns green. Not only is this dangerous, but it'll also result in sub-par Scrabble habits (and probably sub-par word choice as well) because you don't take the time to thoughtfully construct your rack.

Bingos With a Little Less Bing 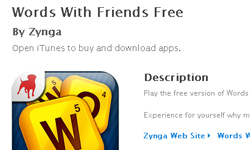 You can play Words With Friends on a variety of platforms, from smartphone apps to Facebook.
Screenshot by HowStuffWorks.com

A huge difference between Words with Friends and Scrabble is how bingos are treated. In Scrabble/Words with Friends parlance, a bingo is when you can use all seven letters on your rack to make a word on the board. It's not easy, and you're rewarded 50 bonus points for your effort on top of the score.

But wait a minute -- that's only in Scrabble. In Words with Friends, bingos are only worth 35 points. What does that imply? It might mean that in Scrabble, building your rack (and thus holding onto letters) is a more important strategy. In Words with Friends, the benefit of playing medium-sized words (especially those that can get you on a bonus square) becomes way more important than one big word. You put an X on a Triple Letter square, and you've got yourself 28 points right there. It might not be worth it to wait just to get an extra 35 points and possibly miss the bonus.

Of course, this is counteracted by an important factor: No matter what platform you're playing on, you're still trying desperately to impress your opponent with dazzling skill. In that mindset, a bingo is always welcome.

Look to the Board

You'll notice right away that there are a few very obvious differences between Scrabble and Words with Friends that can affect your game. (And they are obvious for a reason, as we'll see.)

The board is set up completely differently, for one. There are more triple-letter spaces and fewer double-word squares. The Scrabble board's bonus squares are laid out in a lovely X in the middle pattern; Words with Friend's chooses a subdued diamond pattern. That means you're working less toward the corners in Words with Friends.

Now why those differences? Copyright, almost surely. If Words with Friends has a different board, different standards of play and different piece distribution, it can legally claim it's a different game from Scrabble. And you, in turn, can keep tapping away on your phone to your heart's desire.