by John Kelly
Prev NEXT
17 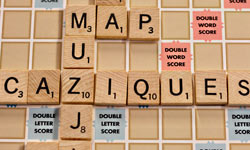 When Spanish explorers first reached the West Indies, they found tribes of Indians who described their chiefs using this word. The conquistadors applied the word, which can also be spelled "caciques," to all native chiefs. It also refers to a tropical bird similar to an oriole. In a game in England in 1982, Dr. Karl Khoshnaw set the record for the highest single word score in Scrabble competition. He played "caziques" across two triple word squares for a total score of 392.