by Patrick J. Kiger
Prev NEXT
3 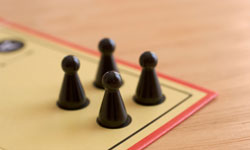 Parcheesi is the American version of this board game.
iStockphoto/Thinkstock

In the Indian game of Pachisi, two to four players move pieces known as pawns around a cruciform board and reach their home square, or charkoni. The game dates back to approximately the 6th century A.D. and is closely related to another Indian game, chaupar. The name is the Hindi and Urdu word for 25, which is the highest number that players originally could roll with the cowrie shells that they once used as dice [source: Botermans].

The 16th-century emperor Akbar was a fanatical devotee of the game. When Akbar built a new capital for himself at Fatehpur Sikri, he included a giant stone board, on which he played marathon games lasting as long as three months, using slave girls dressed in colorful costumes as live pieces [source: Abram]. A century or so later, English travelers brought the game back from India to Europe. The game's concept was so appealing that it inspired clones such as the English game Ludo and Americanized versions such as Parcheesi, which was first copyrighted by E.G. Selchow and Co. in 1869, and is now made by Hasbro [source: University of Waterloo].

On a superficial level, pachisi seems simple to play, but skilled players use complex tactics and strategy, such as using pawns to erect barriers for opponents and capturing an opponent's pawns, forcing them to start over. Another factor that adds complexity is that in the four-person game, players form partnerships. Even after a player's pawns have reached the charkoni, he or she will continue to assist the partner, running pawns on additional laps and teaming up to form barriers for the other two players [source: Botermans].