by Patrick J. Kiger
Prev NEXT
5 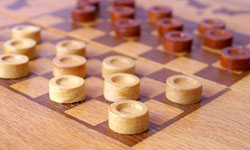 There are just 16 regulations in tournament level checkers play.
iStockphoto/Thinkstock

Like dominoes, checkers -- also known as draughts -- dates back at least several thousand years to Egypt, where archaeologists have found familiar-looking round pieces and boards marked with grids of squares in ancient tombs [source: Walker]. In 360 B.C., the Greek philosopher Plato also mentioned the game in his book "The Republic." He asks, "But is the just man or the skillful player a more useful and better partner in the game of draughts?" [source: Plato]. The game survived the decline of the Hellenic world, and eventually resurfaced in Renaissance Europe, where the first checkers rule manual was published in 1549.

Today, there are different versions of the game, including Standard American checkers, which is the one played in the United States. In the American game, players face off on either side of a 64-square board, each armed with 12 pieces. The game's object is to capture all of the opposing player's pieces by jumping over them, or to leave him or her with no legal moves. Initially, a piece can only move forward diagonally, until it reaches the row closest to the opponent, which is known as the "king's row." At that point, a piece is "crowned," and can move either forward or backward [source: American Checker Federation].

Rules-wise, checkers is so simple that even U.S. tournament-level completion has just 16 relatively terse regulations. But that's deceiving because elite players use tactics and strategies with names such as "the double-ended trapping trio trick" and the "forced capture policy" that rival chess masterminds' gambits in complexity [source: Checkers-strategy.com].