by Patrick J. Kiger
Prev NEXT
7 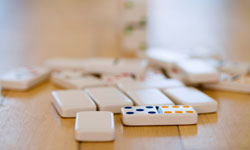 A domino set was found in the tomb of an Egyptian pharaoh.
Jupiterimages/Polka Dot/Thinkstock

The origins of the domino -- a small, flat, rectangular block of wood or bone, with one blank side and the other usually marked by an arrangement of spots, called pips -- is a bit murky. The oldest known domino set, found in the tomb of the Egyptian pharaoh Tutankhamen, dates back to 1355 B.C., and the medieval Chinese apparently played dominoes, as well, before they showed up in Europe sometime in the mid-1700s [source: Armanino].

Today, European and American domino sets generally have 28 pieces, each marked with a different configuration of pips, such as 6-5, 4-0 or 3-1. They're used to play a variety of different games -- for example, Muggins, the most popular American game. Two to four players are involved. The dominoes are shuffled facedown on the table, and players draw for the lead, with the "heaviest" piece -- that is, the one with the most pips -- winning the chance to go first. Each player than randomly draws the number of pieces required for the game (in American games, usually seven). The lead player then lays down a piece, usually the one with the most pips. The other player or players have the opportunity to match it with a similarly valued piece, or to pass. The laying down of pieces continues until someone plays all of his or her pieces; the winner gets a number of points equivalent to the pips on the pieces remaining in the other players' possession. The first player to 50 or 100 wins.

While most casual players probably assume that the outcome of a dominoes game is mostly the luck of the draw, hard-core dominoes enthusiasts develop complex strategies, based on intricate mathematical computations that they perform in their heads, which dictate when to play pieces with various pip counts [source: Yates].