by Patrick J. Kiger
Prev NEXT
9 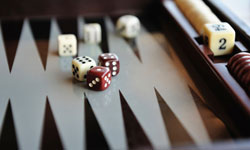 Backgammon may seem like a game of luck, but enthusiasts will tell you differently.
iStockphoto/Thinkstock

Backgammon is one of the world's oldest games. Archaeologists discovered a board and pieces beneath the rubble of the ancient Burnt City in Iran's Sistan-Baluchistan province, which dates back to 3000 B.C. [source: Payvand Iran News]. It also was played by the Romans, who called it Ludus Duodecim Scriptorum ("the 12-sided game"). And it became a popular diversion among American college students in the 1970s.

Backgammon's appeal, in part, lies in its symmetrical minimalism -- two players, each armed with 15 pieces called stones -- try to move them in opposite directions around a board divided into quadrants, along a path of 24 points connected by lines, and then remove them all from the board. The number of points a player can move a stone is determined by the roll of the dice, which gives backgammon the appearance of being a game of luck. In truth, chance determines the outcome only when two players are of identical levels of ability, according to the enthusiasts' Web site Backgammon.org, which offers an extensive library of articles on backgammon tactics and strategy. The ability to perform mathematical calculations in one's head and analyze the impact of various options is one thing that separates the best players from dabblers [source: Simborg].