by Patrick J. Kiger
Prev NEXT
1 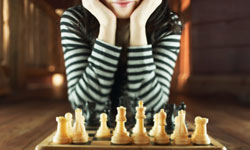 Chess challenges both the young and the old.
Brand X Pictures/Thinkstock

Chess, a stylized simulation of warfare that probably first originated in India in the 7th century A.D., may be the most universally popular board game ever created -- and one of the most addictive. As David Shenk recounts in his 2007 book "The Immortal Game," the French painter Marcel Duchamp, one of the most influential figures in 20th-century modern art, gradually became such an obsessive chess player that by his early thirties, he had virtually stopped producing art, so that he could devote virtually every waking minute to playing. "Everything around me takes the shape of the knight or the queen, and the exterior world has no other interest for me other than its transformation to winning or losing positions," he wrote [source: Shenk].

Chess has been an object of fascination and obsession for so many over the years because it embodies Bushnell's theorem; on the most basic level, it's so simple that elementary-school children can learn its rules, such as the diagonal-only movement of bishops and the king's ability to move only one square at a time. At the same time, that simple structure gives virtuosos the ability to conceive and perform complex strategies. While chess is often thought of as a mathematical game, experts say the real contest is often a psychological one, in which players scrutinize one another for subtle cues and tendencies that predict behavior and reveal weaknesses. As Soviet chess trainer Mark Dvoretsky once noted: "The opponent makes an apparently innocent move, but for some reason or another, he rouses our vigilance and promptly we discover the cunning that is concealed" [source: Avni].