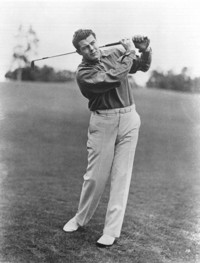 Lawson Little once said, "It is impossible to outplay an opponent you cannot out-think." See more pictures of the best golfers.

Lawson Little dominated amateur golf for a two-year stretch even though his professional career was considered a disappointment. In winning both the U.S. and British Amateurs in 1934 and 1935, Little accomplished a feat unmatched by even Bobby Jones.

Little, born in 1910 in Newport, Rhode Island, first attracted attention in the 1929 U.S. Amateur. After Johnny Goodman scored a shocking upset of Jones in the first round, Little beat Goodman in the next round.

Little reached the semifinals of the 1933 U.S. Amateur, earning a spot on the U.S. team for the 1934 Walker Cup at St. Andrews. He won both of his matches there, then stayed in Scotland for the British Amateur at Prestwick.

Little's performance in the 1934 British Amateur final is one of the finest days of golf ever played. He won the scheduled 36-hole match by a record margin of

Returning to America, Little rolled to the U.S. Amateur title in another lopsided final, beating David Goldman, 8 & 7. The margins were closer in the following year's final matches -- 1 up over William Tweddell in the British Amateur, and 4 & 2 over Walter Emery in the U.S. Amateur.

When the championships were done, Little had won 31 consecutive matches to sweep the world's major amateur titles two years running.

Little turned pro in 1936 instead of trying for what would today be called a "three-peat." He won the Canadian Open that year, but his shining moment as a professional came when he defeated Gene Sarazen in a playoff to win the 1940 U.S. Open. However, that was the only major he won as a pro, and he collected only eight pro victories in all.

The stocky Little was one of the longer hitters of his day. He was also known for a fine short game, which was helped for a time by carrying as many as 26 clubs before the USGA imposed a 14-club limit.