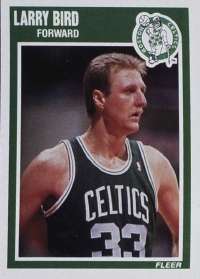 When Larry Joe Bird fell off the turnip truck and into the lap of the Boston Celtics, a new era began in professional basketball. When Bird arrived in the NBA in 1979, attendance was down and fan interest was close to nil. By the time he retired in 1992, NBA arenas were sold out routinely and the game's popularity was at an all-time high.

Bird, along with fellow stars Magic Johnson and Isiah Thomas, rekindled interest in the game and revived franchises in Boston, Los Angeles, and Detroit -- three of the most important markets in the league. Boston won three championships during Bird's tenure and played in the NBA Finals five times. Bird was the Rookie of the Year in 1980; the league's Most Valuable Player in 1984, 1985, and 1986; and a nine-time member of the All-NBA first team. His career averages: 24.3 points, 10.0 rebounds, and 6.3 assists.

At first blush, Bird didn't look like a future Hall of Famer. His nickname was "The Hick from French Lick," which pretty much said it all. While other players flew through the air with the greatest of ease, Bird played below the rim.

But Bird was 6'9", 220 pounds, and he could run all day. He was sensational on the vaunted Celtics fastbreak, rumbling down the wing or orchestrating plays from the middle. No other forward in NBA history passed with the flair and effectiveness of Bird. Bob Cousy, who elevated passing to an art form in the 1950s, said Larry was the greatest passer he ever saw. And Bird was perhaps the most accurate shooter the game has ever seen. During the 1986-87 season, he became the first player in NBA history to shoot at least 50 percent from the field and 90 percent from the free-throw line in the same season. He repeated the feat the following season.

Bird loved and respected the game. His greatest attribute, though, was his competitiveness. He wanted the ball, even demanded the ball, in pressure situations. If an opponent made him look bad on a certain play, he would return the deed many times over. He talked trash, badgered officials, infuriated opponents, and made untold 3-point baskets with the shot clock winding down. The Celtics knew that with Bird, they'd usually find a way to win.

Bird was born December 7, 1956, in West Baden, Indiana, the third son in a family of five boys and one girl. Encouraged by his older brothers, he began playing organized basketball at age 10. He didn't have a car when he became driving age, so he played basketball incessantly. He was a 6'3" guard during his sophomore and junior years at Springs Valley High in French Lick, but he grew to 6'7" when he was a senior. Averages of 31 points and 20 rebounds led to a scholarship from Indiana University, but after living in a small town, Bird felt overwhelmed in Bloomington. He lasted about a month at IU before returning home to enroll at nearby Northwood Institute. Weeks later, he dropped out. Eventually, he found work driving a garbage truck and doing maintenance work for local parks and roadways. It appeared that his basketball career was over.

However, the suicide of his father, a short marriage, and his own competitive juices prompted Bird to give college one more try, and he enrolled at Indiana State in 1975. After sitting out one year under NCAA transfer rules, he averaged 32.8 points and 13.3 rebounds during the 1976-77 season and led the Sycamores to a 25-3 record. Bird was eligible for the 1978 draft (the Celtics selected him with the sixth pick), but he returned to school seeking a degree and the national championship. He got the degree but had to settle for runner-up in the NCAA Tournament. His undefeated Indiana State team lost to Michigan State, led by Magic Johnson, in the 1979 championship game.

Bird dominated the NBA from the get-go. In 1978-79, the year before he arrived, the Celtics had won 29 games. With Bird in the lineup in 1979-80, they won 61 games. Bird led Boston in scoring, rebounding, minutes, and steals. He was named Rookie of the Year, ahead of Magic, and finished third in voting for the MVP Award.

The next season, the Celtics added center Robert Parish and forward Kevin McHale, who along with Bird formed the heralded "Big Three." The Celtics were off and running, galloping to championships in 1981, 1984, and 1986. Bird was the MVP in the latter two Finals series. In the Game 6 title-clincher against Houston in 1986, he had a triple-double.

In fact, Bird was a veritable triple-double machine. He had more than 50 during his career, including one against Utah in 1984-85 that also included nine steals. Also that year, Bird scored 60 points against Atlanta, setting a Boston club record. The 1985-86 season may have been Bird's best. He had 10 triple-doubles and became the second player in NBA history (after Cliff Hagan of St. Louis in 1960) to finish the season in the top 10 in five different statistical categories -- scoring, rebounding, free-throw accuracy, 3-point shooting, and steals. He joined Bill Russell and Wilt Chamberlain as the only players to win three consecutive MVP Awards.

Bird played with considerable pain during the latter stages of his career. He missed all but six games of the 1988-89 campaign because of injuries to both heels, and he sat out 66 games over his final three seasons because of a bad back. "Larry Legend" called it quits in August 1992.

Bird often said he would return to French Lick to coach youth basketball upon his retirement. He put those plans on hold when he accepted a management position with the Celtics in 1992. But without Bird on the court, Boston quickly disappeared from the top of the Atlantic Division standings. Without Bird, the Celtics were just another team.

Bird soon moved back home as the head coach of the Indiana Pacers in 1997. With his guiding hand on the floor and later, in the executive suite, the Hall of Famer steered the Pacers to a decade of success.

By spring 1992, some Boston fans started feeling sorry for Bird. His back had been aching since the '90s began, and some games he just couldn't suit up. Retirement seemed imminent.

But on March 15, 1992, Larry Legend lived again. With a bad ankle adding to his ailments, Bird tallied 49 points, 16 rebounds, and 12 assists as Boston defeated Portland 152-148 in double overtime. His buzzer-beating 3-pointer tied the game at the end of regulation. Said teammate John Bagley, "I felt all we had to do was get the ball to Larry." Unfortunately, this was the last hurrah for Bird. He retired after the season.

Some rate the Boston frontcourt of Robert Parish, Bird, and Kevin McHale as the greatest of all time. Parish and McHale provided interior scoring and yeoman defense, while Bird simply did it all.