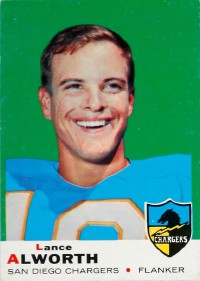 Lance Alworth was the "prize catch" of the young American Football League when, in 1962, he signed with the San Diego Chargers instead of the NFL's San Francisco 49ers.

Al Davis, then a Chargers assistant coach, signed Alworth. "Lance was one of maybe three players in my lifetime," he said, "who had what I would call 'it.' You could see right away he was going to be special."

Alworth (born 1940) was a much-heralded All-American halfback from the University of Arkansas.

A three-year starter, he gained 1,257 yards rushing, caught 38 passes for 666 yards, returned 51 punts for 690 yards, and brought back 31 kickoffs for 740 yards. To say he was versatile would have been an understatement.

He became known as "Bambi" in the pros, a nickname he disliked. Teammate Charlie Flowers gave him the name his first day in training camp.

During his nine years with the Chargers, the deer-like receiver averaged more than 50 catches and 1,000 yards per season. An All-AFL choice and an AFL All-Star Game performer seven straight years, Alworth literally filled the AFL record book with his amazing feats.

Lance played for the Chargers through the 1970 season before switching to the Dallas Cowboys for the final two campaigns of his brilliant career. In 11 pro seasons, he caught 542 passes for 10,266 yards and 85 touchdowns. He caught at least one pass in every AFL game he played, including a then-pro-record 96 straight.

Alworth, more than any other player, epitomized the wide-open style of offense featured in the AFL. His patented leaping catches and blazing after-the-catch runs are legendary. It was only fitting that in 1978 he became the first AFL player to be elected to the Pro Football Hall of Fame.