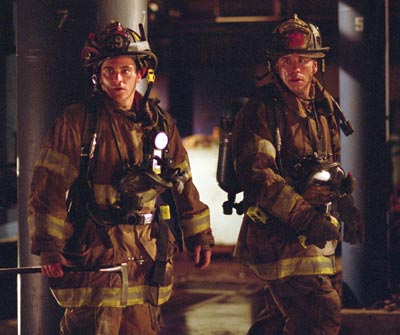 There's a reason Hollywood has made so few films about firefighters. To get realistic fire effects on film, you generally need actual fire, and fire is highly unpredictable and difficult to control.

Anyone attempting to harness it for cinematic purposes has his work cut out for him, as director Jay Russell discovered in bringing "Ladder 49" to the screen. The drama, starring Joaquin Phoenix as a Baltimore firefighter trapped in a collapsed grain elevator, was a frightening prospect for Russell and his team

Russell, Phoenix, co-star John Travolta and special effects coordinator Larry Fioritto filled us in on this amazing and unprecedented production. 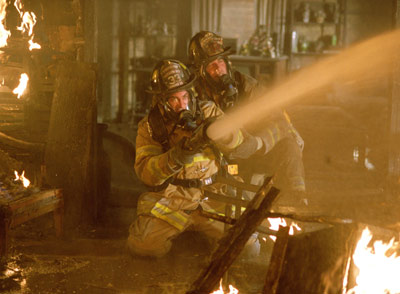 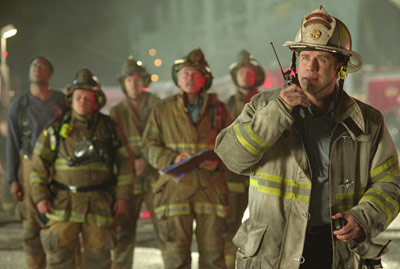 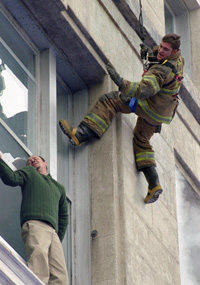 To prepare for the movie, Russell mandated that Phoenix and other actors go through intense firefighting training. "I wanted the actors to have this immersive experience," Russell explains. "And the only way to do that was to train them for their own safety so they'd know what to do with the equipment they had and in case something went wrong. As much as the fire was completely controlled throughout, you could only control it so much."

In his 3 1/2 weeks of training, Phoenix bunked at a firehouse and rode out with the crew of BCFD Truck 10. He worked out before production and all through filming, to prepare for maneuvering in heavy gear. "They had prop versions in Styrofoam, but it was really important to me that I had the real stuff," Phoenix explains. "After experiencing what I did in the field and going on real calls, anything I did on the set seemed like nothing."

One of those real fires, an especially hot and smoky affair, particularly unnerved him. "The stairs went out from under me and I slid down and had no idea where I was. I was completely lost -- I couldn't see anything. I started panicking and then I remembered what I learned. I put out my arms and spun around until I hit somebody."

Phoenix also learned about controlling fear and his instincts. "Everything in your body is saying 'get out.' You can't see, you can't hear -- all you hear is the sound of fire. You can't feel anything because you've got on all this gear and big gloves. You never overcome the fear but you learn to control it, and trust the equipment," says the actor, who also faced his fear of heights in ladder and rescue sequences in the film.

"When he went over the side of the building and hangs by a rope, he was frightened but he did it," says Russell.

Along with the cast, Russell literally underwent a trial by fire, via a simulator called "The Maze," at the BCFD academy. "It's this series of boxes connected by holes," John Travolta explains. "And they put you in full equipment and pump smoke in, and you have to find your way through. It's hot and claustrophobic and you think you're going to die. It's a mind-altering experience."

Russell wanted to experience The Maze before shooting a scene in which Phoenix's character becomes lost in a dark, smoky building. "But about halfway through, I completely panicked. I freaked out. I started seeing things and hearing things. When I finally found my way out I was drenched in sweat. But what it did was inform me how I was going to shoot that sequence. It's all about what's going on in your head." 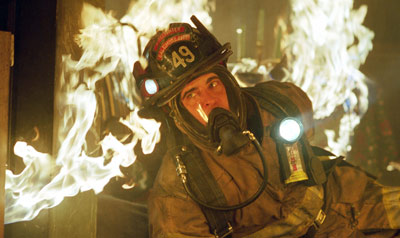 The Ladder 49 script was originally set in New York, written prior to the 9/11 terrorist attacks. Russell agreed to direct it on the condition that the setting would be changed. "I'd lived in New York for 11 years and would love to shoot a movie in New York, but this wasn't going to be the one," Russell explains. "If the movie takes place in New York it becomes about that one day ... The whole point of the movie is that while it's absolutely a tribute to the firefighters on 9/11, it's also a tribute to the firefighters on 9/10, 9/12 and 9/13."

But the director concedes that 9-11 may have been a factor in the production getting a green light from Touchstone. "Was it sped up because of 9/11? Probably. But that has nothing to do with any of us who actually made it."

Russell says that the script underwent other changes during production, "based on direct experiences and stories... It was a constant process of exploration. Things changed as we went, as we learned from the firefighters."

For Phoenix, it was not only a learning process, it was a profound personal experience. He explains: "It's cool to be a part of a film that actually means something to so many people. I've never been thanked for making a movie in my entire life, and that really means a lot."

For more information, check out the links on the next page.