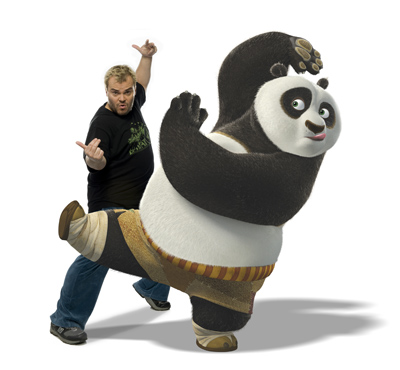 Talking animals have been a mainstay of animation since the early Disney days, and modern cartoon moviemakers have taken the furry fauna to even more realistic levels thanks to many improvements in computer capabilities. But "Kung Fu Panda," DreamWorks Animation’s latest CG endeavor starring Jack Black in the title role, is a whole other animal.

Not only is the film populated by a menagerie of different creatures, most with fur and all with clothing -- both difficult to design and animate -- the main characters execute complicated kung fu moves in several extended fight scenes in the movie.

Five years in the making, "Kung Fu Panda" is set in dynastic China and tells the tale of ­Po the Panda (Jack Black), who works with his dad in a noodle shop but would love nothing more than to be a kung fu master like his idols the Furious Five. But lacking the confidence and skills, the klutzy, oversize fan boy admires them from afar -- until an unexpected turn of events, and an ancient prophecy -- put him front and center in a climactic battle against a formidable enemy.

Jack Black, who recorded his part on an average of once a month over the last three years, isn’t the only marquee name lending his voice to the project. Angelina Jolie, Seth Rogen, Jackie Chan, Lucy Liu and David Cross make up the Furious Five and Dustin Hoffman is their trainer, Master Shifu. Ian McShane voices the villain, Tai Lung, and Michael Clarke Duncan is the prison commander, Vachir.

Blending their performances with the animated visuals fell to co-directors Mark Osbourne and John Stevenson. Read on to find out how they brought the fight scenes to life.

The "Kung Fu Panda" merchandise runs the gamut from action figures to plush toys, stickers, a Rock ‘em Sock ‘em Panda and an Activision video game. "We’ve been closely involved with that because everybody on the film loves video games," notes director Stevenson. "There are a bunch of characters that got cut from the movie that you’ll see in the game," adds co-director Osbourne.

Although there’s also a tie-in with McDonald’s, which will offer Happy Meals with toys inside, it should be noted that noodles and tofu are the mainstays of the movie characters’ diets. No carnivores in this cartoon. "Everybody is vegetarian, even our predatory characters—otherwise it got too weird," explains Stevenson.

The greatest challenge for the filmmakers was re-creating the titular martial arts with animated characters in a way that was unique to the characters.

"We didn’t want it to look like human beings wearing animal costumes. We had to imagine how each character would do kung fu, based on the physiognomy of the animal itself," Stevenson outlines.

Story artists Jan Nelson and Simon Wells conceptualized the action sequences with the help of Rodolphe Guenoden, a storyboard artist and martial arts practitioner who served as animation supervisor later on.

"He understands kung fu and how it works on the anatomy," says Stevenson, comparing him to Wu Ping, the martial arts choreographer who created the moves for "Crouching Tiger, Hidden Dragon."

Sketching out the fight sequences in 2-D first, "He was able to show people how a particular movement would go. It was a very interactive process and if we didn’t have Rudolf I don’t think we’d have been able to do it."

Black, whose favorite scene is an early one where Shifu teaches Po the basics of kung fu with chopsticks and dumplings, thinks they really brought the spirit of kung fu to the animation. As for Po’s unique approach to the martial arts, "Po’s style is soft and bouncy -- a heavy butt squisher," Black laughs. "If he sits on you, it’s pretty much over!"

As you’d expect, there’s a lot of comedy in the movie, but the directors were careful to ground their characters in reality. "We realized we had to ask the audience to buy into talking animals and ancient China, so the acting had to be very real. If the characters moved in a way that was too cartoon-y you wouldn’t understand the change up. So even though we had these cute animal characters we tried to make them act in a very real and genuine way when they weren’t doing kung fu," Stevenson explains.

Each character presented its own challenge. "The crane is individually feathered. The snake required a huge amount of technical R&D and innovation to make her fully rigged and capable," Stevenson points out. "Then we had furry characters, wearing clothing, which is very complicated interaction, and we had them doing kung fu. The rigs -- the things that make the characters move -- are much more complicated than the rigging in any other movie."

With the characters in the most realistic animated form possible, the directors then had to turn their attention to achieving a true representation of the landscape of ancient China.

The directors and their design team took a cue from classic martial arts films in creating the milieu for "Kung Fu Panda." Incorporating a 2-D anime-style dream sequence that opens the film, "Even though we were doing a comedy adventure we strove very hard to make an epic, beautiful backdrop against which those comic stories could play out," adds Stevenson.

"It’s not a particular time period, but down to the details of roof shingles and water buckets and the tables and the cutlery, we did a lot of research to make sure that there was nothing in terms of the architecture or the references that would be incorrect," he notes. "We’re asking people to buy a lot of big crazy stuff in the film and to do that they need to accept that the baseline for the world is honest and genuine and credible."

Just for fun, they threw in some subtle in-jokes for the enjoyment of fellow kung fu aficionados -- and those who can read Chinese. Stevenson offers the example of a sign reading "Dragon Gate Inn" in Chinese. "That’s a reference to a great martial arts movie from the ‘60s. We’d sprinkle little things like that in. It doesn’t affect the story, but it made us happy."

Nevertheless, they intentionally avoided delving too far into pop culture and contemporary references. "It would have been a very easy choice to go for the kung fu parody with puns and that kind of stuff but parodies wear out their welcome after about ten minutes," observes Stevenson. "We were trying to return to a more timeless form of storytelling. I think a lot of animated films have chosen to go with pop culture references and be very post-modern in their attitude. We wanted a completely unique world that you’d never been to before that had its own rules and that didn’t reference anything from today."

What they did want, however, was for the actors to bring the characters to life -- to give them their own spin on what the scriptwriters have given them. In the next section, we’ll look at how they did it.

A stunned Furious Five are left in the wake of Tai Lung, as the vengeful snow leopard makes his way toward the Valley of Peace.
DreamWorks Animation LLC

Jack Black was the directors’ first choice for the role of Po, which changed somewhat once he came aboard. "Originally, the character was a bit snarker, but Jack revealed to us this sweet, vulnerable side," explains Stevenson. "Po became this charming, innocent, goodhearted character, and revealed a side of Jack that you haven’t seen in a lot of his films. I think it makes Po very memorable and guy you root for."

Black has voiced animated characters before in "Shark Tale" and "Ice Age," but "Kung Fu Panda" is the first time he’s using his natural voice. He had his misgivings about signing on because of that, "but when they showed me some of the artwork and told me the basic story of the movie it just sounded too good to pass up," he says. Plus, it was an easy gig: "No makeup, no costumes, and no waiting around all day for them to set up the lights and focus the cameras," he points out.

In the recording studio, "They were filming me just in case I did some funny moves that they wanted to copy. They use my movements as a reference," notes Black. He recorded alone for the most part, but did one session with Dustin Hoffman. "All the dialogue for the chopstick fight came out of that session. Dustin was trying to be as funny as Jack and Jack was trying to be as serious as Dustin so it was amazing to see that dynamic," says Osbourne. "Jack’s got a great imagination and he can just be at the mike and get there really easily. It was a little bit harder for Dustin and putting him together with Jack actually helped him a lot in solidifying who that character was and what the dynamic was."

Black immediately related to several aspects of Po. "The daydreaming -- I share that with him. And the insecurity -- it reminds me of my early days in acting when I didn’t have a lot going on career-wise." Another lure for him was making a movie his children can see. The father of one young son and another child on the way, Black notes, "in a few years they will be watching cartoons and I will be able to show them one that I am in."

The family-friendly "School of Rock" made him realize that he "could be funny without dropping F-bombs," and although his next release is the R-rated comedy "Tropic Thunder," due out in August, Black says he now feels more comfortable doing movies that are strictly for a family-oriented audience. "Before, I thought it would hurt my indie cred in the rock world," he notes, referencing his Tenacious D musical persona. "I don’t really care about that now."

He’s also on board with the movie’s positive, empowering take-away. "It’s got a nice message about following your dreams and staying true to who you are and not being embarrassed about who you are," Black says. "The ‘believe in yourself’ message isn’t original," acknowledges Stevenson, "but we’d rather have some positive take away from the movie. We wanted to make a real martial arts movie that would have funny stuff in it but real emotion and very cool action that could go up against the summer movies we were going to be playing against," he continues. "Even though it’s called ‘Kung Fu Panda’ there’s no reason it can’t be beautiful, funny, emotional and have great action and a great message."

For more information on "Kung Fu Panda," animated movies and related topics, follow the links on the next page.

What is 'development hell'?
What does a greensman do on a film set?
How Muppets Work