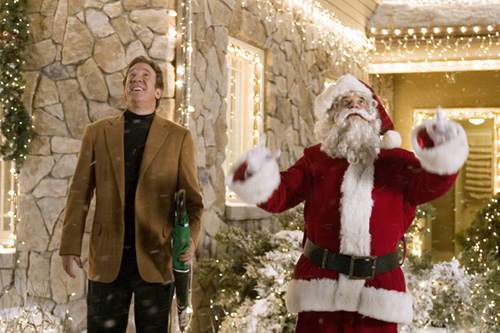 With the location secured, Stover had three weeks to design the street and houses. "When it was finally lit and decorated at night and we saw the whole street lit up, it had to look magical and beautiful," and that was in addition to accounting for blocking, sight lines, and the relationship of each house to the others. In addition to creating different height levels for various properties, the street had to be oriented East-West, so that the Kranks house could be on the south side "so it would be in shadow throughout the day and the cinematographer could control the light."

In Stover's "back story" premise for Hemlock Street, the housing tract was developed in the 1920s and had previously been a pasture with a river running through it, which accounted for the bridge he erected there. "There are cobblestones showing through the tar on the street. The curbs are bashed up so they look 50-60 years old. There are old manhole covers. There are no sidewalks because I don't think there would have been sidewalks then. We went through a lot of trouble to make it look as old and as real as possible."

Then, continues Stover, "The next horror became how do we make the vegetation look like it has been here for 80 years, and the only way to do that was with a core group of old-growth trees." Fortuitously, the owner of the Downey property had a half dozen 40'-60' trees that were about to be cut down, and Stover was able to uproot and replant them on the set. "Then, of course, we had to get rid of all the leaves." Crewmen hand-denuded them to make them appropriately wintry, and supplemented them with purchased evergreens. "We had to put sod in, too."