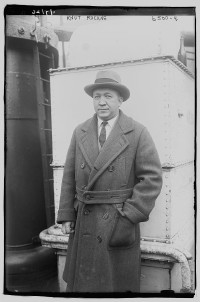 More than 60 years after his death in an airplane crash in a Kansas wheat field, Knute Rockne of Notre Dame is still the most famous football coach in history. Perhaps no coach, not even "Rock" himself, could live up to the legend he left behind.

His locker room orations were famous. A master psychologist, he believed that the right word to a player was sometimes more important than hours of practice time. His "win one for the Gipper" speech in 1928 brought an underdog Notre Dame squad victory over powerful Army.

On another occasion, when the Irish trailed at halftime, his players sat in the locker room dreading their coach's appearance. At the last second, the door flew open and Rockne yelled, "Let's go, girls!" The team stormed onto the field and triumphed.

But Rockne's success was based on more than words. His practices were meticulous. Plays were run over and over until the timing was perfect.

His philosophy emphasized speed, timing, deception, and quick-opening plays over brawn. Many of his greatest players, including the "Four Horsemen" backfield that took the Irish to the Rose Bowl in 1925, were much smaller than their opponents.

He employed outstanding assistants such as the famous line coach Hunk Anderson. Many of his assistants as well as many of his players went on to coaching success in college and pro football.

The forward pass had been legalized in 1906, but few important teams took it seriously until Rockne and quarterback Gus Dorais used it to lead then little-known Notre Dame over Army in an astounding upset. From that point on, the pass grew in importance as an offensive weapon.

At the height of the Depression, Rockne called together an All-Star team of his former players to play the New York Giants for charity. The Giants won, but the game raised $115,000.

What Are the Costs of Canceling College Football?
10 Tips for Hosting a Fantasy Football Draft
Top 5 Tailgate Tips