What does a key grip do? 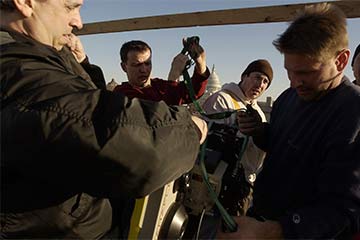 Key grip Dean Citroni (right) prepares a scene during the filming of 'Thank You for Smoking.' The key grip is the supervisor of all the grips, who set up and move the cameras on set.
Tom Williams/Roll Call/Getty Images

If a movie set is like a construction site -- and in many ways it is -- the key grip is the foreman. The key grip is the supervisor of the team of grips, the guys (yes, they're usually guys) who build, set up, move and maintain all the camera equipment and lighting for a shoot. The grips do all the hard work behind what (hopefully) appears to audiences as an effortless, beautifully lit shot. An efficient, well-run crew of grips can make the difference between a movie production that comes in on schedule and under budget and one that doesn't.

The key grip works closely with the director of photography (DP or cinematographer) and gaffer (head electrician). The key grip and gaffer are responsible for all the physical work that goes into making the DP's vision a reality. Before production gets under way, the three will scout out the different shooting locations and figure out the logistics and budget. The key grip will get a handle on any tricky camera or lighting situations and start planning what kind of equipment might be needed, from dollies, tracks and tripods to rigs, jibs and cranes. Sometimes the key grip will rent the equipment, but oftentimes he'll have a lot of his own supplies. He's also responsible for stunt preparation and renting vehicles.

Once the shoot starts, the grips are always in motion – moving cameras and adjusting lighting rigs between every take, lugging equipment to where it'll be needed next. The key grip's job is a bit more administrative, but there's definitely plenty of physical involvement with the materials. He's in constant communication with the DP and gaffer about shot blocking, controlling and shaping the light and executing the shots perfectly. On smaller shoots, the key grip will be in charge of crew safety (on bigger productions that responsibility goes to the first assistant director).

The key grip's second-in-charge is the best boy. The best boy acts as an intermediary between the key grip and the entire crew of grips. An experienced key grip is usually able to handpick his crew, which can make a huge difference in how smoothly the show runs.

To be a key grip, you obviously have to spend years rising through the grip ranks and maintaining good relationships with cinematographers. It can be pretty tough to even get your foot in the door, though, because they're basically all union jobs. A key grip can expect to make $60,000 to $100,000 a year, and bigger shoots can pay out $40,000 for a 12-week job [sources: Forbes, Dzyak]. That's certainly not as much as the bigwigs, but it's nothing to sneeze at, either.