by the Editors of Publications International, Ltd. Aug 10, 2007 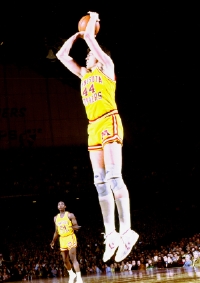 ©University of Minnesota Athletic Communications. Kevin McHale starred for 13 seasons in the NBA for the Boston Celtics. See more pictures of basketball.

Kevin McHale may have been the best low-post scorer in basketball history. A forward and sometimes center with the Boston Celtics for 13 seasons, McHale had a dizzying assortment of one-on-one moves and a sensational shooting touch.

McHale's trademarks were a straight-arm jump shot, a jump hook, and an assortment of moves to the basket. His long arms gave him the presence of a seven-footer (though he was only 6'10" and 225 pounds) and made his shot nearly impossible to block. The Celtics' best defensive big man in his prime, he was named to the NBA All-Defensive first team three times and to the second team three more.

Born December 19, 1957, in Hibbing, Minnesota, McHale starred at the University of Minnesota, graduating as the Golden Gophers' second-leading scorer and rebounder. He came to Boston after the Celtics arranged a trade with the Golden State Warriors on the eve of the 1980 NBA draft.

The deal also netted center Robert Parish, giving Boston one of the great front walls in history: McHale, Parish, and Larry Bird, who had joined the Celtics the previous season. While he had to wait nearly five years for a starting job (Cedric Maxwell was ahead of him), McHale soon became the league's top reserve. He averaged 10.0 points his rookie year and increased his scoring average the next six seasons, cresting at 26.1 in 1986-1987.

Meanwhile, the Celtics won three NBA titles, defeating the Houston Rockets in 1981, the Los Angeles Lakers in 1984, and the Rockets again in 1986. McHale scored a Celtics-record 56 points in 1985 and, in the 1989-1990 season, became the first player in 20 years to finish in the top 10 in field-goal percentage and free-throw percentage in the same season.

During one stretch, he played in 413 consecutive games, but leg injuries gradually took a toll, causing him to miss 51 games over his final three campaigns. He retired in 1993 and became vice-president of basketball operations for the Minnesota Timberwolves in 1995.