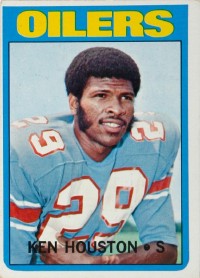 Ken Houston was the premier  strong safety of his era. See more pictures of football players.

Ken Houston's career was great, but strangely unnoticed, until the Monday night match-up between the Washington Redskins and their arch rivals, the Dallas Cowboys.

Sixteen seconds remained. Dallas trailed 14-7 and faced a fourth-and-goal situation. Cowboys quarterback Craig Morton took the snap from center and immediately tossed a short pass to fullback Walt Garrison. Garrison gathered the ball in and turned toward the end zone. All that stood between him and the tying touchdown was Redskins safety Ken Houston. Houston stuffed him. This was perhaps the defining play of Ken Houston's career.

Houston (born 1944) played linebacker at Prairie View A&M before being taken in the ninth round of the 1967 AFL-NFL draft by the Houston Oilers. Undersized (6'3", 198 pounds) for a linebacker, Houston was wisely converted by the Oilers to a safety.

The talented, hard-hitting Houston earned a starter's role by the third game of his rookie season. Two weeks later, in a game against the New York Jets, he scored two touchdowns, one on a 71-yard blocked field goal attempt and the other on a 43-yard interception return.

In all, Ken played six seasons of outstanding football in Houston. During that time, he earned five AFL All-Star Game or Pro Bowl berths. His nine interception returns for touchdowns were an NFL record. Still, outside the AFC Central, he inexplicably remained "Ken Who?".

Then in 1973, Redskins coach George Allen traded five players to the Oilers to secure Houston's services. Many felt Allen paid too high a price.

However, after his now-famous fourth game as a Redskin, when he stopped Garrison just inches short of the goal line, Houston made the trade seem like a steal. Never again would he be unnoticed or underrated.

Over the next eight seasons, Houston earned All-NFC or All-Pro honors seven times and was selected to play in 10 Pro Bowls.