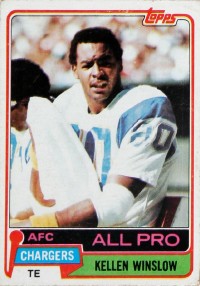 Kellen Winslow was plagued by injuries but still became one of the NFL's most successful tight ends. See more pictures of football players.

Kellen Winslow is well-remembered for his courageous play during the 1981 AFC divisional play-off game between the San Diego Chargers and the Miami Dolphins.

For much of the game, Winslow -- the 6'5", 250-pound tight end for the Chargers -- suffered dehydration from the heat, humidity and numbness in an injured shoulder. Three times he was helped off the field; each time he returned to catch yet another of his play-off record 13 receptions.

And if that wasn't enough, he even blocked what would have been a game-winning field goal with just seconds remaining in regulation play. It was vintage Winslow.

This was truly a game for the ages. The epic match ended with just 1:08 left in overtime when Rolf Benirschke kicked a 29-yard field goal to give the Chargers a 41-38 victory. The teams traded possession six times in the overtime period.

A gifted athlete, Winslow (born 1957) did not play high school football until his senior year because his mother feared he might get seriously injured. Even after just one season of high school football, he received offers from four schools -- Kansas State, Kansas, Missouri, and Northwestern.

He chose the University of Missouri, where he captured All-American honors. In four seasons, he caught 71 passes for 1,089 yards and 10 touchdowns.

Selected in the first round of the 1979 NFL draft, Winslow got off to a quick start with 25 receptions before being sidelined with a broken leg in the seventh game. He returned in 1980 with a career-high 89 receptions for 1,290 yards. Twice more he made 88 catches.

Even though he was plagued by injuries through much of his nine-year career, Winslow still amassed an impressive 541 receptions for 6,741 yards and 45 touchdowns. At the time of his retirement, he ranked 14th among all NFL pass receivers in number of receptions.

It's fair to say that Kellen Winslow didn't merely play tight end, he redefined the position.