Browse the article Just how fake are reality TV shows? 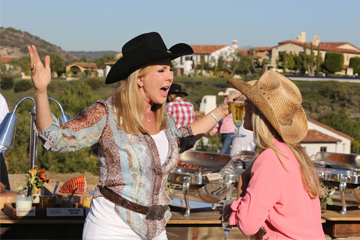 Reality shows are only "real" in the sense that they are put together from unscripted footage.
Evans Vestal Ward/Bravo/NBCU Photo Bank via Getty Images

Things have gone terribly wrong on the set of "Big Babies." Tommy — fetish practitioner, adult baby and one of "Big Babies" biggest stars — has climbed 60 feet up a tree wearing only a diaper, upset that "Mommy Kathy" has cheated on him. The show's camera operator gamely clambers onto a nearby roof to get the footage. Just when things are getting good, the cameraman slips and plummets to his death. His final act is to clutch his camera to his chest and protect the footage.

The only hitch is: "Big Babies" isn't a real show. It's the fictional satire at the heart of "All Is Not Lost," a short story by screenwriter and author Mark Jude Poirier. Nevertheless, reality TV is so notoriously unbelievable that even the idea of a show based on the adult baby fetish community sounds fairly plausible. With reality show topics spanning the gamut from extreme couponing to strange-but-true addictions, at some point one must ask: just how fake are reality TV shows?

Reality shows are only "real" in the sense that they are put together from unscripted footage. As Writers Guild of America member Ryan Stradal puts it, "Unscripted does not mean unwritten." While Stradal concedes that the source material is real, he points out that it is the job of editors and unscripted television writers to shape that raw footage into episodes, with sympathetic characters and story arcs that have a beginning, middle and end. Stradal says, "Unscripted storytelling is often about working backwards ... crafting an inevitable occurrence into an emotional, humorous, or provocative journey" [source: Stradal].

In addition to strategic editing, reality shows also employ predetermined constraints (called "set pieces") designed to shape the action, spice up reality, disrupt relationships and misdirect expectations. "Survivor" is famous for introducing plot twists that corrupt alliances and force dramatic betrayals. "The Biggest Loser" encourages gameplay by forcing contestants to face regular weigh-ins. One season, even "American Idol" threw a wrench into the works, saddling the final five with a choice of whether to send someone home as usual or to let everyone stay another week — and send two people home the following week.

As if plot twists and fanciful editing aren't enough, reality stars themselves are notorious for manipulating reality. Though they aren't actors, many reality stars know exactly how to work a camera. Spencer Pratt, who starred on MTV's "The Hills," has admitted to faking fights with co-star Heidi Montag in order to get more screen time [source: Today]. Writer and actress Anna Klassen summed up her experience starring in a reality TV pilot with a succinct, "There is nothing real about reality TV" [source: Klassen].

Whether reality TV is real, fake or somewhere in between, audiences still can't seem to get enough unscripted television. Learn how reality TV works and much more on the next page. We promise we're telling the truth.