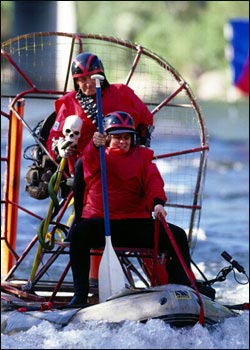 The power raft was one of the more popular challenges from season 5.
Photo courtesy TLC

Every episode of "Junkyard Wars" starts well before the contestants ever arrive at the junkyard. First, the producers and researchers have to come up with the idea for a viable, difficult but not impossible challenge. Ideas come from all over -- suggestions from friends, family members and visitors to the site's message boards. The producers focus on machines that are interesting to watch in action and interesting to watch being built, which usually means big machines that move in some way.

Once the producers have an idea for the show, they round up two experts, often through the Internet. The experts are usually professional engineers or scientists working in fields related to the challenge. For an episode where the two teams had to build fireboats, the producers recruited two guys who work for pump-manufacturing companies. For a land-yacht competition, they brought in a land-sailing champion and a university professor who works on land yachts as a hobby.

When they find the right people, the producers explain the challenge to the experts and ask them to come up with a few possible designs. Typically, the two experts approach the problem from different perspectives, steering the teams in different directions to make the challenge more interesting. You get two different ideas, rather than two versions of the same device.

On the building day, the experts give some suggestions about what the teams might build, but ultimately the contestants decide exactly what they want to do. The experts are mainly there as back-up, in case the teams have no idea how to proceed or find themselves heading down the wrong track. As the day progresses, the teams usually have to modify their original plans and try something different.

Based on input from the experts, the producer may decide to "seed" the junkyard with specific items. For the most part, the contestants have to work with whatever the junkyard workers happen to dump on the set (the set is indeed a real junkyard -- or at least a piece of one -- located in Los Angeles, California). This includes flattened cars, stacks of wood (mostly old concrete forms), plumbing fixtures, wire rope, HVAC equipment, electrical conduit and various discarded machines full of gears and bearings. But the producers may decide that the teams can't realistically build some machines in 10 hours without particular components.

The seeded items are old salvage material, just like everything else, and the producers mix them in with the rest of the junk. The producers will also provide some select new items to ensure the machines are relatively safe. It can be very dangerous to outfit a machine with some older equipment, such as safety valves and busted hydraulic hoses, so the producers amend the spirit of the game a little to keep people from getting hurt. The producers may also remove certain items from the junkyard if those pieces would make the challenge too simple.

During construction, safety is always a major concern. Firefighters and paramedics are on hand at all times, and the producers won't let the contestants attempt high-risk building procedures. Additionally, the producers schedule a "safety day." On the show, the competition day seems to immediately follow the build day, but in actuality, the contestants get a day off while machine experts check their creations for any potential safety problems and make the necessary modifications.