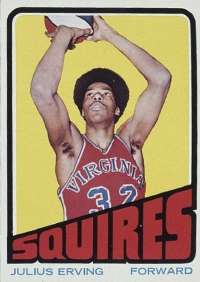 Julius Erving never once failed to lead his team into the playoffs. See more basketball pictures.

Julius Erving, the most graceful basketball player of his era, soared through a professional career that spanned 16 seasons and two leagues, and never once did he fail to lead his team into the playoffs. He was the pride of the American Basketball Association in the early 1970s and the toast of Philadelphia in the early 1980s, when he led the 76ers to the NBA championship. When he retired following the 1986-87 season, "Dr. J" was the third-leading scorer in professional basketball history.

A lithe 6'7" forward, Erving made spectacular plays look easy. With a running start, he could leap from the foul line to the basket for a dunk. He excelled in the open court or driving along the baseline, where he'd mystify opponents by taking off on one side of the basket and finishing the play with a reverse layup on the other side of the hoop.

Born February 22, 1950, and raised in Roosevelt, New York, Julius played college ball for the University of Massachusetts in the weak Yankee Conference. Nobody paid much attention. After Erving said he wanted to leave school after his junior season, the Virginia Squires bought his ABA rights for $10,000 and blindly negotiated a four-year contract. Neither Squires coach Al Bianchi nor general manager Johnny Kerr had ever seen Julius play in person.

"There's the doctor digging into his bag again," teammate Willie Sojourner said when Erving did something spectacular. The nickname stuck. The Squires even held a "Doctor Night," where everyone with a medicine bag or a stethoscope got in for a dollar.

But even the most breathtaking player in basketball couldn't stop the Squires from losing money. Erving jumped to the NBA after his rookie season, signing a lucrative contract with the Atlanta Hawks, but a federal judge ordered him back to Virginia. The next year, after Dr. J led the league in scoring (31.9 points a game), he was traded to the New York Nets. The deal accomplished three things: Julius got the contract he wanted; the Squires got two players and $1 million, allowing them to stay in business; and with Erving in the nation's largest media market, the ABA moved a step closer to merging with the NBA.

In the Big Apple, Dr. J was the league's most influential player, winning the MVP Award three consecutive seasons and leading the Nets to championships in 1974 and 1976. He outdueled David Thompson in a celebrated slam-dunk contest at the 1976 All-Star Game in Denver. In five seasons in the ABA, Erving averaged 28.7 points, the highest career mark in the history of the renegade league.

The merger brought the Nets into the NBA for the 1976-77 season, but after paying the franchise fee, the Nets couldn't afford to keep Julius. They sold him to the Philadelphia 76ers for $3 million. The Doctor, playing with former ABA rival George McGinnis, immediately propelled the Sixers to the 1977 NBA Finals, where they lost to Portland in six games.

Dr. J had 11 glorious seasons in Philadelphia, captivating even the most jaded Sixers fans with his exploits. He won MVP honors in 1981, averaging 24.6 points and 8.0 rebounds, and made first-team All-NBA five times.

When The Official NBA Basketball Encyclopedia was published, league officials recruited Erving to write the foreword. "I've always taken a very artistic approach to the game," wrote the Doctor. "The interesting thing to me is that such an approach now seems to be the norm, rather than the exception. In the 1960s and 1970s, anything different was viewed as unorthodox; now I see much more creativity among the players, and it's a beautiful sight."