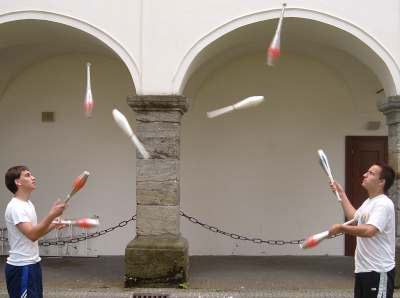 Passing is probably the most familiar and spectacular way jugglers can interact with one another. Jugglers orient themselves so that they can make one of their tosses to another juggler instead of to their other hand. The two (or more) jugglers must synchronize their patterns and then throw a prop to another juggler on a designated toss. You'll often see jugglers pass with clubs, as they are impressive and easy to see. Because of the way a club flips, a juggler must catch incoming clubs by raising their arm up so the forearm is perpendicular to the ground (assuming his partner used an underhanded throw -- over-handed throws require the catcher to hold his hands as if he were catching a normal toss).

At some juggling gatherings, groups of performers can participate in combat juggling. The objective is to be the last juggler juggling. It's an every-juggler-for-himself kind of competition that can involve dozens of jugglers bumping into each other at once. One common strategy is for a juggler to toss one prop very high while using his hands to bat at his opponents' juggling patterns. Other jugglers steal props from opponents in order to defeat them. Most groups use padded or soft clubs in combat juggling, and injuries are not uncommon.

There are several juggling organizations across the United States. The International Juggling Association holds a festival each year featuring workshops and competitions for hundreds of jugglers. The Internet Juggling Database has a list of local juggling clubs throughout the world. Most of the organizations are free and welcome new members year-round.